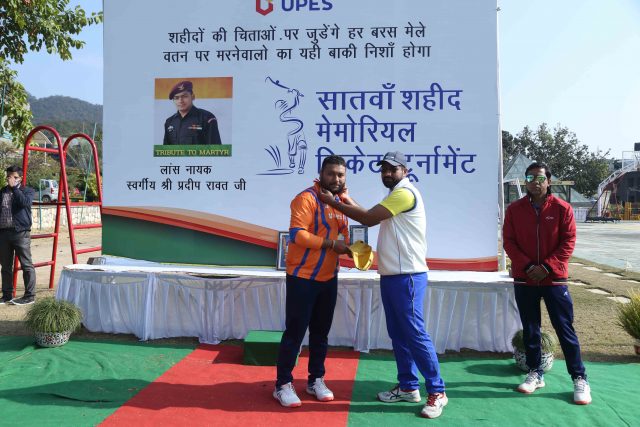 Dehradun, 4 Jan: In the ongoing 7th Shaheed Memorial T-20 Cricket Tournament, the UPES team won today’s match against the PWD team by 48 runs. Mohit Miyan was declared the Man of the Match. A strong partnership between the opening batsmen, Mohit Miyan and Gaurav Taneja, led the team to a massive total of 206 runs. Mohit Miyan scored 84 runs in 40 balls. Gaurav Taneja scored 50 runs in 41 balls.
The UPES bowling made the win inevitable. Lokendra Sharma bowled brilliantly, taking 3 wickets and only giving away 23 runs in 4 overs, creating the needed pressure to restrict the opponents from scoring runs. Vaibhav Sharma took 2 wickets, followed by Mohit Miyan, Manish Madaan, Sandeep Bahuguna and Sanjay Gusain taking 1 wicket, each.
The PWD team won the toss and decided to field first. Vijay Mehra from the PWD team was the highest scorer with 48 runs off 42 balls. PWD managed a total score of 158 against UPES’ 206.
UPES has won all their four league matches making them the undisputed winner of Pool A, taking them to the Quarter Finals which is scheduled for 6 January.
Sharad Mehra is the Manager and Coach and Manish Yagnik is the Assistant Manager and Assistant Coach of the UPES team.
The 7th edition of this tournament is being organised in the memory of Shaheed Lance Naik Pradeep Singh Rawat of ‘4 Garhwal Rifles’. The final match of the tournament is scheduled on 11 January when the Martyr’s family will be present and honoured as the ‘Chief Guests’ and beneficiary of the UPES homage to Shaheed Lance Naik Pradeep Singh Rawat.