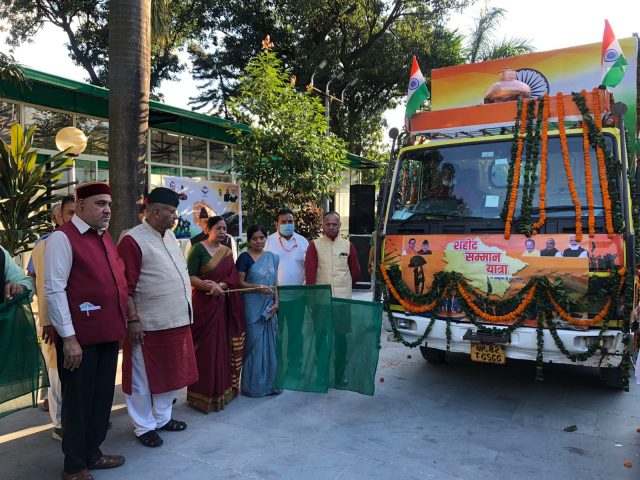 Mussoorie, 19 Oct: Chariots of the “Shaheed Samman Yatra”, which will collect the soil from the courtyards of martyrs’ home in the state for the ambitious ‘Sainik Dham’ project of the State Chief Minister and Sainik Welfare Minister, were flagged off today.
Minister Joshi established a new tradition today by having the Veer Naris, wives of Ashok Chakra winners, Vinita Bisht and Shanti Vohra, perform the flagging off. The Shaheed Samman Yatra is going to start from Sawad village of Chamoli on 21 October, and on 24 October from Moonakote in Pithoragarh. The Cabinet Minister, who was present at today’s programme, questioned the Congress’ concern for ex-servicemen, evident only at the time of elections. He asked where that party was when the defence services personnel were asking for ‘one rank one pension’. The Congress performed this masquerade only during elections and then forgets to honour the military.
He thanked Prime Minister Modi for allocating the funds necessary for One Rank One Pension. The PM had declared ‘Sainik Dham’ as the fifth Dham. On 21 October, the Chief Minister would inaugurate the Shaheed Samman Yatra by being present in Sawad, Chamoli. Similarly, on 24 October, Defence Minister Rajnath Singh would launch the yatra at Moonakote.
Joshi declared that the Sainik Dham being built in the state would be so grand that tourists coming to Uttarakhand would not go without visiting it. Earlier, senior BJP leader Jyoti Gairola informed the gathering about the Shaheed Samman Yatra. The event was conducted by BJP’ Sridev Suman Mandal President Poonam Natiyal. The vote of thanks was proposed by Major Yogendra Yadav, Director and Additional Secretary, Sainik Welfare Department. An army band also performed on the occasion. Apart from hundreds of ex-servicemen, Brigadier Bhandari, Mahavir Rana, Colonel Rana, TD Bhutia, Padam Singh Thapa, Jyoti Kotia, BJP Shaheed Durgamal Mandal President Rajiv Gurung, Anurag, RS Parihar, Niranjan Doval, etc., were among those present.