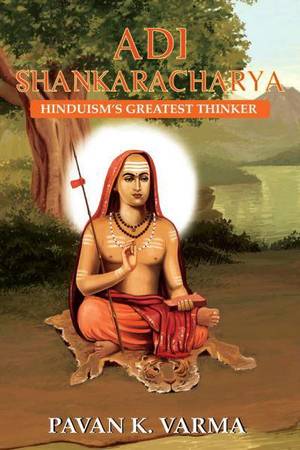 The use of effusive superlatives for a person subject to contingencies of human existence  usually makes one wary so the first reaction to the title of Pawan Varma’s book would make one circumspect. However, a close perusal of Adi Shankaracharya: Hinduism Greatest Thinker fully vindicates Varma’s unreserved veneration of Shankara, the great thinker whose life was extraordinary and unique by all accounts.  The stupendous intellectual energy he exuded in his short life span confirms in no uncertain terms that he indeed remains Hinduism’s greatest thinker.  There have been few minds more universal than his.

Most accounts of Shankar’s life are hagiographic. Varma carefully selects the details of his life which find common concurrence and dismisses the claims, for instance, that describe him as an avatar of Shiva. After travelling the length and breadth of India Shankara died in Kedarnath at the young age of 32. Varma embarks on his own odyssey of quest travelling to all the places associated with Adi Shankaracharya – beginning with his birthplace- Kaladi where Shankara was born in 788 CE . In Omkareshwar the author visits the cave where the young Shankara met his guru, Govindapada. From Omkareshwar the author journeys to  Varanasi, Prayag, Kashmir and the Himalayas, in the process discussing his life and teachings with a variety of interlocutors,  weaving the profound life of Shankara into his own personal visits to the various sites that Shankara frequented, and reliving the legends associated with these diverse locations. Shankara as an institution builder established the organizational structure for the survival and regeneration of Hinduism setting up the four famous mathas Sringeri, Dwaraka, Puri and Joshimatha in the four corners of India creating a philosophical grid to unite people. In so doing he revived a moribund Hinduism that had become paralysed by its own inflexible practice of orthodoxy, ritualism and formality bearing the onslaught of heretical Buddism and Jainism.

The book begins with Shankar’s life, followed by a discussion of his philosophy, and his enduring legacy examined against the scrutiny of science, especially the findings of quantum mechanics. The concluding section provides a select anthology of Adi Shankaracharya’s key works.

The crux of Shankara’s philosophy which draws upon Badrayan’s Brahma Sutra providing the genesis of Advaita Vedanta, is the postulation of the supreme Brahman, the central, transcendental principle of Advaita Vedanta. Since the Upanishads themselves do not constitute a self-sustaining and coherent body of texts Shankara takes it upon himself to harmonize the basic teachings of the Upanishads to uphold the core philosophy of Brahman in keeping with Badrayan’s Brahma Sutra.

Arguing strongly for a realist position Shankara rejects the Vijnanvada of Buddhist position, which holds that objects do not exist external to the processes of consciousness. Shankara arrived at the truths of existence through his rigorous scrutiny of the foundational texts of Hinduism: the Upanishads, the Bhagavad Gita and the Brahmsutras. He wrote extensive and definitive commentaries on each of them. Arguing for the existence of a permanent self, Brahman, which is other than objects and the processes by which they are cognized. He proposes the Advaitin viewpoint that there is nothing other than Brahman, the self-reflexive consciousness. Knowledge of Brahman is not knowledge of Brahman as an object. Rather, it is being Brahman, knowing Brahman, not as an object, but as being identical with one’s true self, that is, self-reflexive consciousness beyond subject–object duality. As the sole reality Brahman Vedanta is beyond all concepts and categories characterized as pure being, immutable, eternal, and destitute of all attributes. In this respect, the Vedantic Brahman differs radically from the Absolute of both Hegel and Bradley. Both Hegel and Bradley arrived at their Absolute or Absolutes by the use of the ontological argument. This argument or proof is foreign to the spirit of the Advaita Vedanta. The Advaitin reaches the notion of Atman or Brahman not through any ratiocinative or dialectical processes, but through reflective scrutiny of experience as such.

Shankara travelled all over India making strong arguments to reinstate and propagate the Adavitic doctrine. He was in his argumentative best in his celebrated and much popularized debate with Manadana Mishra of the ritualistic Mimansa school who was a strong votary of Vedic Karmakanda. The debate in which Mishra’s erudite wife Ubhaya Bharati acted as the adjucator went on for several days at the end of which Ubhaya Bharati conceded that Mishra had lost the argument. But anxious to retrieve the lost ground she challenged Shankara to debate with her, being the ardhangini (one half of his being) of her husband. Shankara reluctantly accepted the challenge. When Bharati questioned  the ascetic on Kamasutra he uses his yogic powers for parakaya pravesh to savour  the delights of marital life, and responded, a month later, to  her queries, with triumphant finality. Following the terms of the debate both Mishra and his wife became the disciples of Shankara. It may be noted here that Shankara’s position with regard to ritual is much more nuanced than sometimes portrayed by his opponents. It is not a complete abandonment of ritual duties but only an abandonment of ritual duties for those rare few who have been through and moved beyond the rituals.

The life of Shankara makes a strong impression of contraries. He had differences with Buddhists but was also inspired by them, and set up monasteries after their fashion.  His belief in the formless Brahman was unflinching, being a firm believer in Advaita, but on a mundane level he is also credited with showing strong devotion to a personal deity and composed hymns to all major gods and goddesses of the Hindu pantheon. He transgresses his ascetic’s vows to tend to his ailing and dying mother and when she  is unable to grasp his exposition of Advaita, he composes and sings a beautiful hymn  to Lord Vishnu for her blissful peace of mind.  And then he performs the funeral rites for his mother in defiance of in defiance of what was ordained for a sanyasi. It must however be granted that although on a certain level, an Advaitin can profess a belief in God, he or she knows that ultimately God is merely a crutch, a heuristic to enable human beings to go one step closer to the ultimate Brahman which is nirguna, devoid of qualities.

The section on ‘The Remarkable Validation of Science,’ is somewhat problematic. I think Shankara created a unique system of Adavaita Vedanta which provides its own validation in experiential terms, which is self -contained and does not depend on the western scientific conceptual frameworks for its credibility and validation. To aspire for such validation merely betrays an anxiety for universal approbation. We should also keep in mind that the scientific-material domain is different from the spiritual domain. Whereas science insists on empirical evidence replicable universally, spiritual experience is unique, personal and transcendental. Since the Transcendent is directly experienced, without the mediation of sensory apparatus, it cannot be approached or evaluated in the empirical manner as in science. In any case, when science itself undergoes paradigm shifts and gropes its way toward understanding the cosmos and cosmic forces it would be rather premature to make triumphant assertions on the convergence of science and metaphysics.

Adi Shankarachary’s life is a revealing testimony to an expansive and liberal understanding of the roots of Hindu philosophy which militates against the narrow-minded bigotry being propagated by the Hindutva fundamentalist forces  today. Varma’s mission is to save Hinduism from its self anointed protectors.  ‘The tragedy,’ as Varma states, ‘is that in the land that gave birth to this unparalleled genius, very few are aware of the greatness of his contribution… Even those who are entrusted with preserving his corpus of thought are often more distracted by the ritual of religion- which has its own place- than the grandeur of his metaphysical insights ’(p.205). The Advaitic  vision, as developed by Adi Shankara, offers the ideal matrix for the unity and integrity of India. Shankara’s teachings remain relevant to the present day and the modern Vedanta movement since Swami Vivekananda follows his trajectory. Varma has written a most comprehensible of the life and times of Adi Shakaracharya which will appeal both to the lay reader and the scholar.

(The reviewer is former Professor  and Head of  the Department
of English, H.N.B.  Garhwal  University)