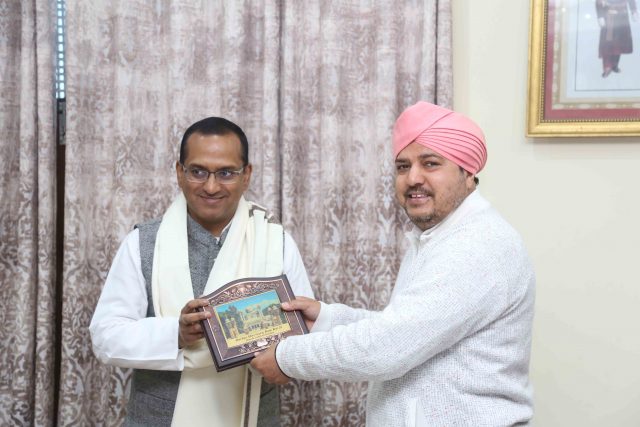 DEHRADUN, 6 Jan: Shaurya Doval, son of National Security Advisor Ajit Doval and founding member of the India Foundation, paid obeisance at the Guru Ram Rai Darbar, here, this morning. He also had a formal meeting with Mahant Devendra Dass. During the meeting, the two discussed possibilities of new employment opportunities in Uttarakhand, role of the youth at the international level, imparting higher education, research work and other significant points. Shaurya Doval has been the founding director of India International. He is also called the ‘Think Tank’ of Great India Thought. He has held prestigious positions in London, Chicago and many leading institutions of India. During the meeting, Shaurya Doval agreed with the Mahant that Uttarakhand is rich in natural resources that could serve as a catalyst to its development. He also expressed the desire to visit the Shri Guru Ram Rai University of which Mahant Devendra Dass is the Chancellor. Shaurya Doval was told about the historical and religious aspects of the Darbar Sahib. He was also highly impressed with the architecture of the Darbar Sahib. He praised the achievements of Shri Mahant Indiresh Hospital in the field of providing quality healthcare at affordable prices. The Mahant told him that work was underway on a large scale in the field of higher education at the international level. He said that the youth of Uttarakhand had to be prepared to match the international parameters, which required work on a large scale. The Mahant wished Shaurya Doval a successful life and golden career.