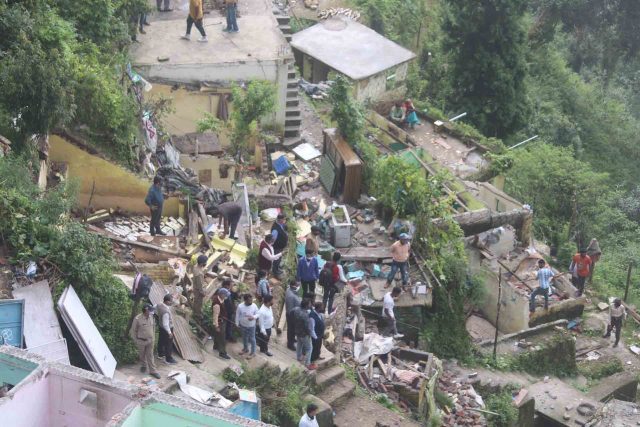 By OUR STAFF REPORTER
MUSSOORIE, 11 Sep: Shifan Court was completely freed of ‘encroachment’, here, today. The constructions at the site were demolished by staff of the municipality led by SDM, Mussoorie, Manish Kumar, and CO, Mussoorie, Narendra Pant accompanied by a large police force. Before the action, the homes were vacated by the resident families, which led to the removal of the encroachment peacefully.
SDM Manish Kumar said that, with the cooperation of the people of Shifan Court, illegal construction on government land has been demolished. He also thanked all the people for maintaining peace during the operation. He said that, for those who have become homeless, the administration had set up a temporary shelter at the nearby temple and gurudwara for some time. So, until the homeless people make their living arrangements, they could stay there. The entire property of Shifan Court is being transferred by the Mussoorie Municipality to the tourism department. Mussoorie Police In-charge Devender Aswal was also present.