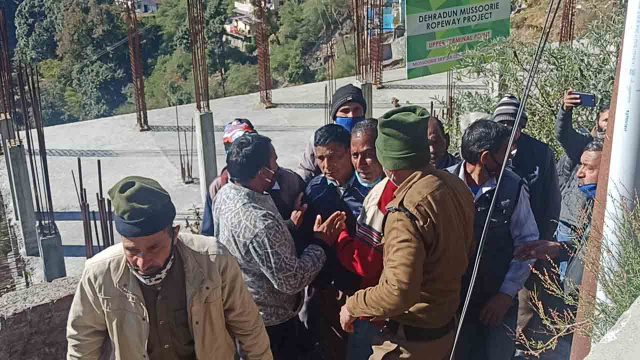 By OUR STAFF REPORTER
Mussoorie, 11 Jan: The 84 families of Shifan Court rendered homeless by the Dehradun-Mussoorie Purukul Ropeway Project have once again started protesting against it here. On Monday, a gate being installed at the entry point of Shifan Court as part of the project was opposed by the evacuees, who stopped the work. Mussoorie Police station Incharge Devender Aswal with a heavy force reached the spot and there was a heated argument between the evacuees and the police.
Sanjay Tamta, Anuj Shah, Sampati Lal and Usha Devi, who have been evicted from Shifan Court, said that the project is being built at a cost of crores of rupees, but 84 families have been left homeless. Neither the public representatives nor the administrative officials are paying attention to them. They also accused MLA Ganesh Joshi and Municipal President Anuj Gupta of ignoring them. They said that, for the last 5 months, they were undergoing unmitigated suffering. They insisted that work on the Ropeway woud not be allowed to start till they are rehabilitated. They were ready to go to jail for this.
Kotwal Aswal said that the Shifan Court land had been handed over to the Tourism Department and construction work was on. High officials had been informed about the whole matter and action would be taken after receiving instructions.
Vijay Ramola and Vijay Bhandari of Garhwal Sabha said that a four storey Dharamshala is being constructed by them next to Shifan Court, which had also received permission from MDDA. The ropeway company was putting up gates outside the Dharamshala, which was being opposed by them. So far, neither the administration nor the company had given any kind of notice on this. They warned that, if the administration or the company tried to capture the under construction building of the Garhwal Sabha, there would be a fierce agitation and they would also knock the doors of the court.
The Shifan Court Permanent Rehabilitation Committee has sent a memorandum to the
Chief Minister through SDM Mussoorie demanding permanent rehabilitation of the 85 families made homeless from Shifan Court.