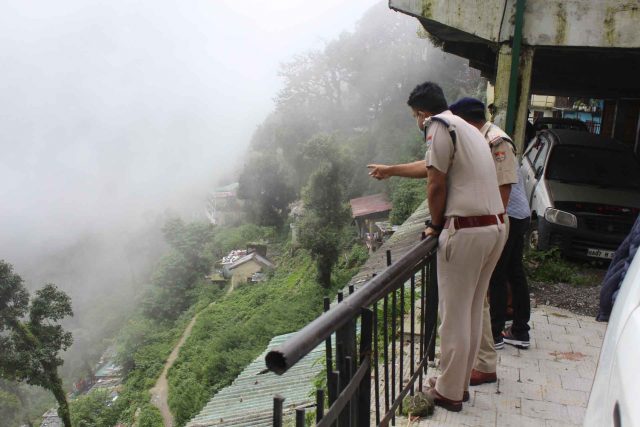 By Our Staff Reporter
Mussoorie, 23 Aug: Action has been initiated by the administration against illegal occupations here at the Shifan Court. Illegal encroachment and construction has been done by more than 80 families at the site.
Mussoorie SDM Manish Kumar, CO Narendra Pant, Executive Officer Ashutosh Sati and Mussoorie police In-charge Devendra Aswal inspected the site today. Action is being taken to vacate the Shifan Court at the directions of the High Court.
Mussoorie Palika Executive Officer Ashutosh Sati said that an action plan is being prepared after inspecting the area. He said that the people living in the Shifan Court would be temporarily housed at the Laxmi Narayan Temple and Gurudwara.
The residents of Shifan Court are very upset. They remind that they have been living there for many years. At election time, the politicians had promised to regularise the occupation. Suddenly, however, they were talking about enforcing court orders. They expressed their resolve to strongly oppose the eviction.
Councilor Geeta Kumai, Pratap Panwar and Darshan Rawat said that action should not be taken to remove the poor people. They needed time for rehabilitation. Mussoorie Congress President Gaurav Aggarwal said that, on humanitarian grounds, the poor people should be rehabilitated first.