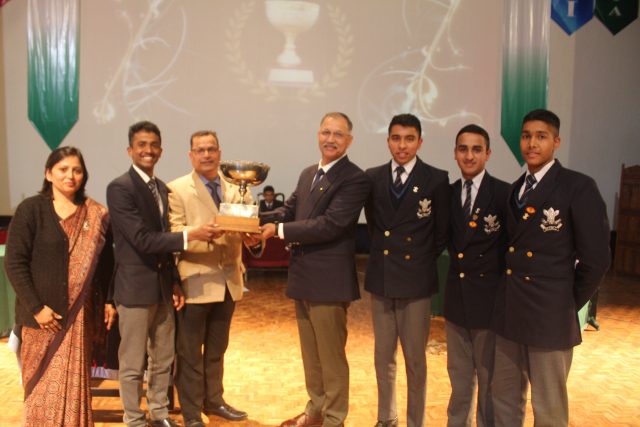 Dehradun, 5 Feb: Shivaji Section was crowned the Champion after it pushed Chandragupta Section back in the overall standings of the RIMC Inter-Section English Debates Competition that saw all the four Sections compete at the highest level at various venues on 4 February.
In the final rounds, held in the presence of Col Ajay Kumar, RIMC Commandant, as the Chief Guest, and judged by Major Meghna, Joyeeta Mukherjee and Malvika Kala, held in the Thinmayya Auditorium, which had the gathering at the edge of their seats, Chandragupta outclassed Shivaji, and Ranjit outclassed Shivaji, in the Junior and Senior Categories, respectively.
They traded debating blows on the topics: “This House Believes that the Process of Competition is more Important than its Result” and “This House Believes that Abhorring Technology and Loving Nature will lead to Development”. Cadet Ishaan Solanki, Cadet Rishan Gupta, Cadet Adityaraj bagged the Best Speaker, Most Promising, and the Commandant’s Special Prizes, respectively, in the Senior Category, while Cadet Yagna Pathak, Cadet Sahas Raut and Cadet Om Ujjwal won the Best Speaker, Most Promising, and the Commandant’s Special Prizes, respectively, in the Junior Category.
Earlier in the day, in the Semi-Finals for Juniors, which took place in GLR and SLR, Shivaji and Chandragupta reached the Final Round after having outdebated Pratap and Ranjit sections, respectively, on the topics: ‘This House Believes that Written Examinations are better than Interviews for Jobs’ and ‘This House Believes that Exorbitant Fines can’t Improve the Mindset of Indians’. Cadet Om Ujjwal and Cadet Yagna Pathak were marked out as Best Speaker and Most Promising Speaker, respectively.
In the Semi-Finals for Seniors, Shivaji locked horns with Pratap in GLR on the topic, ‘The Very Foundations of Secularism have been Irrevocably Rocked in our Country’, and Ranjit vied with Chandragupta in SLR on ‘This House Believes That Democratic Values are Being Pushed to The Limit’ in which Shivaji and Chandragupta sections emerged victorious. Cadet Rishaan Gupta and Cadet Aditya Rana were adjudged Best Speaker and Most Promising Speaker, respectively. The judges not only expressed their admiration for the lofty standards of the competition and the outstanding performances of the cadets but also commended the quality of the topics.
Chief Guest Col Ajay Kumar described the event as a gripping battle between ‘attacks and counter attacks’ and thanked the judges for the painstaking evaluation they did.