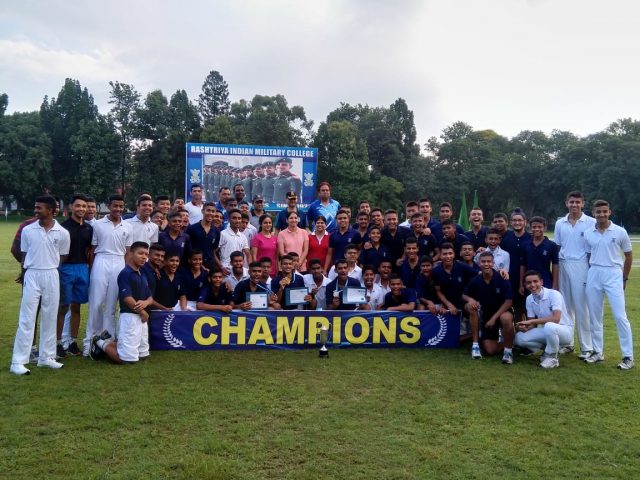 Dehradun, 4 Aug: At RIMC, X-country is regarded as one of the most coveted sporting events.
This year, too, the Cross-Country was organised with all Sections participating, giving their all out on the field. The competition was divided into three categories: Seniors, juniors and Novices. The Novices category was exclusively for the first-termers. The Novices, as well as the juniors, run a route of 3.85 km, which is totally inside the campus.
The seniors, however, run a route of 9.25 km, which includes the juniors route and after that a route of 5.4 km outside the campus. This year, the first-termers ran well, with Cadet Ejaz Ahmed, Cadet Prem Lalwani and Cadet Hadik Garg securing first, second and third positions, respectively.
In the juniors’ category, Cadet Tejas Bhatt, Cadet Madhav Kumar and Cadet Vibhansh Dubey secured the top three positions, respectively. In seniors, Cadet Ronit Mishra secured top honours followed by Cadet Nishakal Dwivedi and Cadet Anantjeet Mishra.
All sections gave of their best. In juniors, the results are as follows: Ist – Shivaji Section; IInd – Pratap Section; IIIrd- Chandragupta Section; IVth – Ranjit Section. In seniors, the result was as follows: Ist – Shivaji Section; IInd – Chandragupta Section; IIIrd – Pratap Section; IVth – Ranjit Section.
Overall, the winner turned out to be Shivaji Section, closely followed by Chandragupta, Pratap and Ranjit Sections, respectively. The coordinator of the event was Mr Karthik Chadala.
RIMC Commandant, Col Vivek Sharma gave away the prizes to the winners. Col Vivek Sharma complimented the cadets for showing exceptional zeal and determination to win and stay ahead. “Overcoming life’s struggles is actually learnt in play fields, one must not give in despite all odds,” said Col Vivek Sharma.

Garhwal Post has established itself as a credible, balanced and forward looking newspaper in India. Based in Uttarakhand, the daily is read by the aware, socially and culturally responsible, high-income elite of society.
Contact us: info@garhwalpost.in
https://garhwalpost.in/dates-holy-week-2022/ https://garhwalpost.in/free-search-dating-sites/