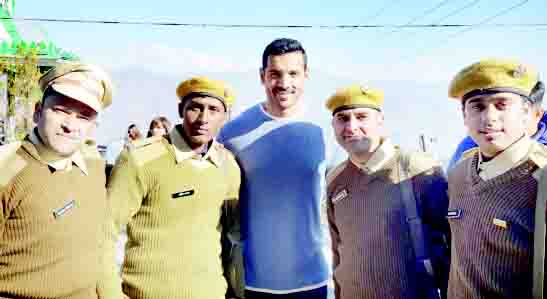 By OUR STAFF REPORTER
MUSSOORIE, 13 Dec: On the third day, today, many scenes were shot in the Library Market on Bollywood actor John Abraham, who is shooting for the film, Batla House, in Mussoorie. The shooting started at 9 in the morning and continued till late evening.
The scenes of a rally carried out by a political outfit, Ekta Party, were shot on the Mall Road, due to which traffic was halted many times, which created a problem for the locals and tourists. In this scene, John Abraham and others were seen raising slogans such as ‘Ekta Party Zindabad’.
From morning till noon, scenes were filmed at Rajkamal Restaurant, City Point Restaurant, Sevaram General Merchants and Duggal-ul-Masjid, Amaniya Street. Later in the afternoon, scenes of the film were filmed around the Ratan Hotel and, after darkness, it was re-shot on the Mall Road.
On Thursday, dozens of local junior artists from Mussoorie took part in the shooting. Throughout the day, there was a huge gathering of John Abraham fans at the shooting site. John Abraham continued to greet his fans by waving, but he was kept away from his fans by the security personnel and members of the shooting unit. The fans who wanted to take photos and selfies with John were left disappointed.

Garhwal Post has established itself as a credible, balanced and forward looking newspaper in India. Based in Uttarakhand, the daily is read by the aware, socially and culturally responsible, high-income elite of society.
Contact us: info@garhwalpost.in
sexy wife date night https://garhwalpost.in/best-australian-hook-up-apps/ lesbian dating app uk