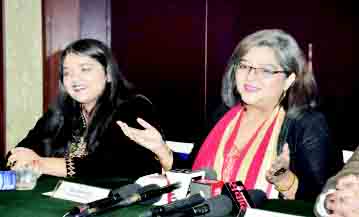 By OUR STAFF REPORTER
DEHRADUN, 11 Jan: Film Producer-Director Kanupriya addressed the media in Doon on Friday regarding her upcoming international feature film on 16 Sanskars of the Hindu Vedic traditions.
It is worth mentioning that the shooting of the feature film will be done at sixteen places in the state including Devprayag, Karnprayag, Chamoli, Mukteshwar, Kausani, Patal Bhuvaneshwar, Champawat, Baijnath, Auli, Jageshwar Dham, Nainital, Dhanaulti, Rishikesh and Haridwar. The film will be screened at various international film festivals.
Creative Director Ojaswini Gul was also present on the occasion.