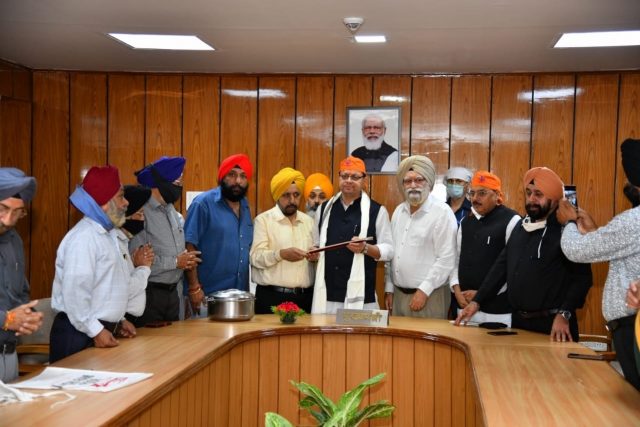 By Our Staff Reporter
Dehradun, 28 Aug: The President and representatives of Gurudwaras of Dehradun, met Chief Minister Pushkar Singh Dhami in the Auditorium at Chief Minister’s Office in Vidhan Sabha Bhawan here today. The delegation thanked Prime Minister Narendra Modi through the Chief Minister for safely transporting the form of Shri Guru Granth Sahib from Afghanistan to India. They claimed that that the Prime Minister had boosted the dignity of the Sikh society by this step.
On this occasion, Ardas was also performed for the first time in the Chief Minister’s Vidhan Sabha office and Kada Prasad was distributed. A shawl and a kirpan were also presented to the Chief Minister on the occasion.
The Chief Minister said that under the leadership of the Prime Minister, the country’s prestige had risen in the world. The safe return of Indians from Afghanistan was being ensured by the Union Government. Dhami added that the state government was in touch with the Ministry of External Affairs to bring the people of Uttarakhand safely from there. Many people had already been brought back. The Chief Minister said that he supported the Sikh society every moment and promised all help and cooperation to the Sikh society in case of any need.
On this occasion Kichha MLA Rajesh Shukla, President of Uttarakhand Sikh Development Council Baljit Soni, President of Guru Singh Sabha Gurbux Singh, Gulzar Singh, Gurpreet Singh, Surender Batra, Jagminder Singh Chhabra, Charanjit Singh, Sewa Singh Matharu were among those present.