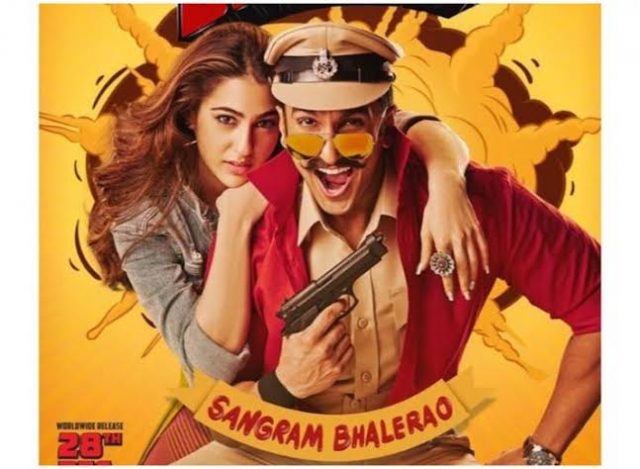 Film Review                                                       Simmba
By Sunita Vijay
A police SUV drifts cleanly. The brakes screech. It comes to a halt. Amidst the cloud of dust, a cop steps out with full police wala swagger and a ‘no nonsense attitude’. He is here to help his colleague, a righteous cop, another human in khakhi, who is in trouble. The hall roars with whistles, hoots and screams to applaud and welcome Bajirao Singham (Ajay Devgan) and the man he is here for is Bhalerao aka Simmba (Ranveer Singh). He pounces on the bad guys like a roaring, angry lion helping the younger cub in distress. The polarising effect is strong. The audience is delighted to see two upright officers in uniform, bravely encountering the bad elements, a wish that every normal human being holds. The duo put the screen on fire with their typical Rohit Shetty’s signature action; money spent well.
Even Ranveer’s landing is heroic; a lion-hearted cop chasing its prey against the colourful backdrop of a dhobi ghat where he nabs the goons and then washes them left, right and centre. This is Simmba, an electrifying Rohit Shetty’s world, a story of an unscrupulous police officer, a carefree man, blustery from childhood days. He lives in a strange fiesta, a fun zone even during the toughest of moments, dancing his way during police raids, cheerfully interacting with his colleagues in the police station and even in the villain’s den. He is called kamina for which he has an unpretentious reply, “Tell me something I don’t know”. For him everything related to money is, ‘mind is blowing’ situation, as he speaks out in his Marathi accent. Even uprooting an innocent old man from his farm doesn’t affect his psyche. He is so obsessed with his robdaar vardi, a gold mine for him, that he hones a tattoo spelling ‘police’ engraved on his arm.
Simmba is fun-loving and his subordinates too are the caricatured versions of comical characters who join his carnival. There is seriousness as well; some preaching and awakening notes through an old misanthropic head constable, Mohille, a role played by Ashotosh Rana who constantly pricks corrupt Simmba’s conscience. The space shared by the two provides many heart-warming moments. The romantic feed comes from across the road ‘Good food’ catering service owner, Shagun (Sara Ali Khan), an orphan just like Simmba.
The film that was running high on a lighter note soon changes gear. A predictable life-changing-tragic moment is strong enough to make Simmba change his course. There are some social messages on the safety of women, corrupt system, alarming rape statistics, onus on mothers for raising their boys the wrong way, the manipulation of the system, the delays in judgements and sadly, it also provides the easy solution to get rid of the culprits, i.e., a made-up encounter. A Rohit Shetty film without action is unthinkable. He loves fuelling it with stunts, colours, spark and exotic locales. Ranveer, a sprightly actor, effortlessly fills the shoes of a nonchalant cop who is as happy as flea in a doghouse. In all the murkiness that surrounds him, he is having a whale of a time. This happy camper is checked brutally only by the cranky Mohille whenever he is sniffing his booty and their conversations are rejoicing.
Simmba is a tailor-made role for Ranveer and he delineates it with full honesty and energy. His captivating charm, chiselled body and a mixture of Hindi-English-Marathi dialogues steal the show. He is adorable in all shades; as a misdirected orphan, a man who forms strong bonds with the people he meets. He maintains his evergreen vivacity with witticism and Marathi accent. His endearing presence dazzles the eyes.
Sara Ali Khan looks ravishingly beautiful with some eye-warming attire but has very little to do. Nevertheless, she stands tall in her small role.
Ashotosh supports Simmba through the alienated aura he is made to share with him, delivering some best moments together. The drinking scene on the roof, the conscience pricking doses, his childlike conduct in Mohille’s presence; all are relishing. A scene where Simmba finally earns a salute from Mohille is euphoric and picturised with positive intensity.
Simmba’s music is not new to the ears but is refreshing. The energetic refined version of ‘Aankh Maare’ stands out and so does the romantic track ‘Tere Bin’ feel pregnant with romantic emotions. The exotic picturisation enhances the effect.
Shetty has not invested much on the plot. He has kept it simple, predictable and un-intriguing. The first half is delightfully humorous but contained villainy. Simmba’s villain, Durga Ranade (Sonu Sood), is khaufnak but follows certain basic moral principles to respect his mom.
The review would be incomplete without mentioning Ajay Devgan’s cameo. His dashing entry lifts the movie to another level. He overshadows everyone for the time he is on screen. His one professional punch is enough to twirl bodies in the air. For a change, Shetty refrained himself from warming our eyes with glamorous Sports cars, but he has proven that he can create an impactful effect even with just one sarkari Scorpio.
All may not be up to the mark in Simmba but most of the things fall in place. Ranveer’s confidence coupled with conviction stands out even in weak shots. As a critic, I may pinpoint patchy weak areas but the entertainment quotient of the movie is overwhelming that overshadows all flaws. 2018’s last weekend truly deserved this potboiler and it would be unjust to give it a harsh treatment when one could see almost all the viewers coming out of the hall happy-chirpy, completely soaked in Rohit-Ranveer fever. The purpose is served.
Let us all sail with Shetty crew and enter the new year with positive energy while savouring the most deserved message on rape this movie delivers.
I go with three and a half stars.