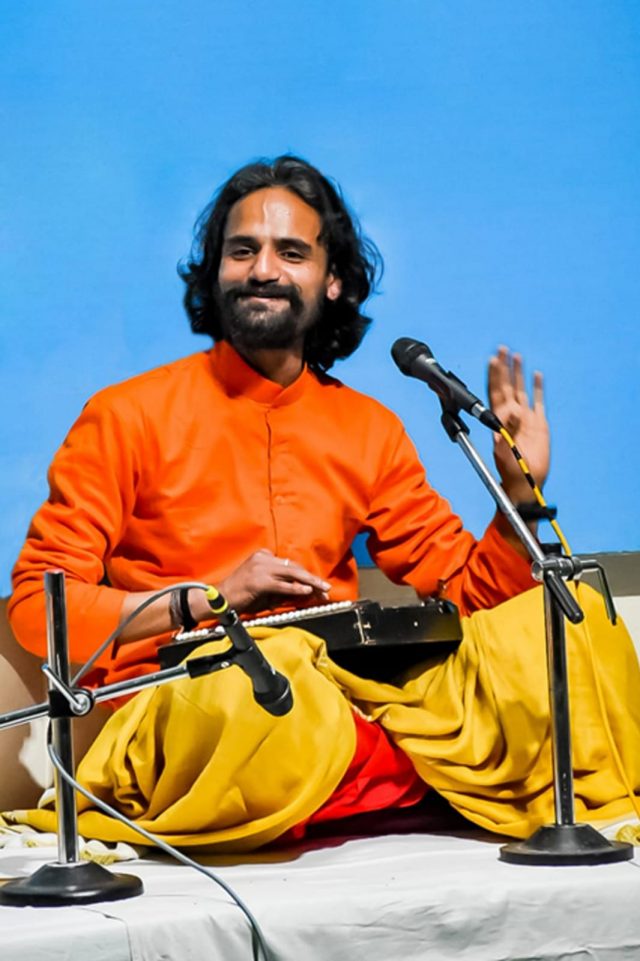 Ashish Kukreti’s music is not just a tune it is a touch. It touches the soul of the listeners and connects them to the almighty in an unusual way!

By Anjali Nauriyal
The adage goes that God respects you when you work, but he respects you more and loves you when you sing. Ashish Kukreti, a practitioner of Hindustani Classical Music from Rishikesh is indeed God’s special person as he has chosen to sing the rainbow. Born in a village Kathoor Bada, in Pauri Garhwal, Uttarakhand he reveals that singing came to him organically from an early age.

With no family background of classical musicians, he found music to be the most inspiring force in his life, the best guide and healer, and above all the finest motivator. He was highly influenced by his grandfather Late Shri Sadanand Kukreti from whom he learnt that music is the most powerful tool for self-nourishment and for the nourishment of others.

He recalls that as he stood at the threshold of adulthood, he was greatly inspired by the legendary Hindustani classical vocalist, Pandit Bhimsen Joshi and desired to become a vocalist himself. Joshi’s influence worked magic on him. But as luck would have it, due to family compulsions and demands of a middle-class family, he was forced to follow a standard trajectory to complete his studies and become employable.

During his college days, he kept his aspirations on a low. After completing his studies, he started taking lessons on musical instruments from Pandit Shivanand Sharmaji.

They say that life has its own plan. One day his teacher asked him to sing, and the teacher’s praise decided his destiny. Music from that day onwards began to have a deep meaning in his life. With the passage of time, he started performing at local events and functions.

Though he had complete support from his family to pursue his career as a musician, but he was burdened with the thought of not being able to discharge his duties as the eldest son of the family. Bowing before the demands of familial responsibilities, he eventually took up a job of a Computer Engineer in Delhi. Though he was doing well in his career, in 2013, he decided to listen to the demands of his inner calling and bid goodbye to corporate life forever.

Thereafter he went through a rigorous schedule and attended musical workshops over a period of five years with Pandit Barun Kumar Pal, one of the lead disciples of Pandit Ravi Shankar and Hansveenā one of the leading instrumentalists of world repute.

In 2014, to further hone his vocal skills, he started taking lessons from Anup Mishra of the Banāras Gharānā, and a disciple of the great Sārangi Maestro Pandit Hanumaan Prasad Mishra. Presently, he is being guided and mentored by Pandit Dr. Vikas Kashalkar who is an accomplished khayal vocalist of the Gwalior, Agra and Jaipur-Atrauli Gharanas.

Ashish has rendered performances in India and abroad and been an integral part of prestigious projects such as OPERA SERIA 2014, Matā Gangā Orchestra Tour 2013 (Musical-Cultural exchange between India and France) and Living Hanuman. He is also an integral member of research being done on the effect of sound in the Srividya Tradition.

This gifted classical vocalist, apart from his practice of eight hours every single day, has set up a registered Trust in Rishikesh by the name of Shruti Saritā Art to sensitize and teach classical music for which special workshops are conducted. In addition the organisation provides platform for classical musicians from all across India, to showcase their talent and promote classical music in the state of Uttarakhand.

Ashish is currently guiding and mentoring approximately 10 students under the Guru Shishya Parampara (Master and Disciple tradition). For the past one year, his organistaion has also offered scholarship to a student to pursue vocal classical music.

Garhwal Post has established itself as a credible, balanced and forward looking newspaper in India. Based in Uttarakhand, the daily is read by the aware, socially and culturally responsible, high-income elite of society.
Contact us: info@garhwalpost.in
hillsboro singles dating small town