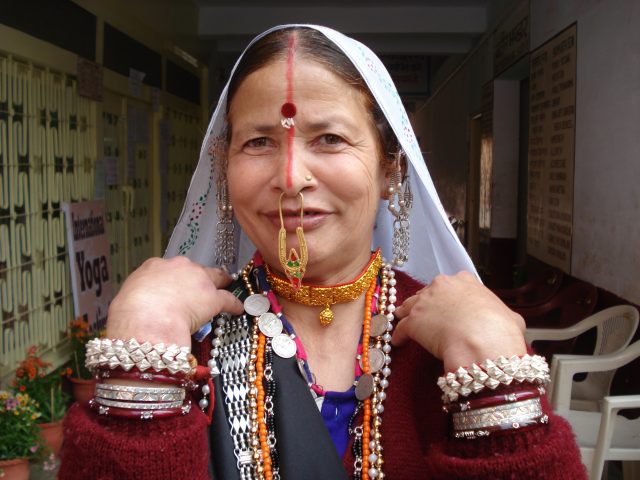 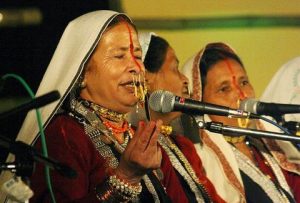 Basanti Devi Bisht has been dubbed the Teejan Bai of Uttarakhand for her distinction and brilliance in chanting Jagars, and for her efforts at saving them from obliteration. And, above all, she has been credited for holding her own in a traditionally male stronghold.
A sexagenarian, she may well go down in history as the last amongst women Jagar singers of the state.
Jagars may be on the brink of obliteration as a result of the younger generations having turned their backs on their traditional format.
Jagars are DevVani:
Jagars are believed to be DevVani or the ‘Language of the Gods’ and of Rishis and Munis. Jagar in Sanskrit means to ‘awaken’ or ‘kindle’. Through Jagars, a spirit may be commanded to inhabit a living person’s body. Traditionally, either the spirit of the dead is called upon, or the spirit of God is awakened and addressed. Jagars are linked to the idea of religious uprightness and goodness. They can be sung as an appeal for forgiveness or expression of regret. They are also sung to seek the blessings of the ancestors.
A singer of Jagars is called the Jagariya and the individual in whose body the spirit is invoked is called the Dangariya. Jagar sittings (singing) or hearings are mostly held throughout the night, and can carry on for days on end.
The catchphrases, subject matter and leitmotifs for the Jagars are an outgrowth from sacred texts such as the Mahabharata. When the singing rises to a crescendo, the Dandariyas oftentimes break into a feisty dance, and fall under a strong spell.
Etymologically, they are Puranic, and can trace back their origins to Vedic Sanskriti. In these Jagars are hidden the traditions and history of the people, who in the last thousand years or so have come and settled in the hills from various parts of India.
Dressed in her customary time-honoured trinkets, charms and ornaments, for the duration of her singing, Basanti Devi makes for an imposing figure. When not singing she is a commonplace housewife dressed in a regular cotton saree.
Obstinate in the face of opposition:
She has been obstinate in the face of opposition that was horrorstruck at the sight of a woman singing Jagars, hitherto a male bastion. There was a time when women were prohibited from even being present when Jagar singing was in progress.
Credit is due to her husband Ranjit Bisht, an ex-army soldier, who reinforced her confidence and helped sustain the pressure from traditionalists, with maturity. He happily plays the thali and the hurki when she sings. Today, the duo is happy that Basanti Devi is widely commended, applauded and celebrated for her contribution to this dying art.
Hailing from Village Lwani situated in the Pindar Valley of Chamoli Garhwal, Basanti Devi grew up listening to the Jagars being sung by her mother on various occasions such as festivals, ploughing, sowing and doing other chores at home and in the fields. Over time, she learnt them by rote, such as the Nanda Devi Jagar, Narsingh Jagar, Bhairav and many others dedicated to local deities.
“Born in the year 1953, I was wedded to an artillery soldier when I was on the threshold of my teens and remained a housewife for the major part of my life,” she recalls. “It was in my childhood that I was exposed to my mother’s Jagar singing. My mother sang Jagars while doing her household chores. I began imitating her singing and the singing of village elders, and gradually developed a love for this form of music. Listening to Jagars in village fairs and festivals consolidated my fondness for this form and I was hooked for life,” she adds. “In a way I think I made up for my lack of schooling by becoming adept at Jagar singing. I managed to attend school only till class 5 and walked a distance of about a mile to reach school. Thereafter, I discontinued studies as the senior school was situated very far away from my village.”
Today, the communities and castes that have been traditional repositories of folklore are moving away from the tradition due to various social and economic reasons. The younger generations do not seem interested in the learning and propagation of the tradition, while the older ones regard it as a vocation that does not pay. Under such circumstances, efforts such as those of Basanti Devi are priceless.
Spiritual singing is strenuous:
“This is spiritual singing, which is very strenuous and leaves an impact on the entire body and mind,” she confesses. “It is difficult and so not easily learnt by the younger generations. And I must say that it was my training with ‘Pracheen Kala Kendra’ in Jalandhar that honed my musical sensibilities. I also trained to play the harmonium under the tutelage of my daughter’s teacher. Once my husband retired, I settled down in Doon and worked at the All India Radio station in Najibabad. Today old age has set in, but my search for old lost songs continues.”
Resplendent costume and traditional jewellery:
Basanti Devi is stunning in her appearance when on stage. Her magnificent traditional attire and old-style jewellery gives her the look of a celestial being. “It is important that I present an authentic picture visually as well. For this reason I love to wear the typical pahari attire and old fashioned jewelry wrought in gold and silver,” she declares. A full-size nose ring, huge necklaces, long earrings, colourful bangles are a must. This apart, a red tikka running from her forehead all the way to the tip of her nose, and traditional ‘pakhula’ make her look full and absolutely deity-like!