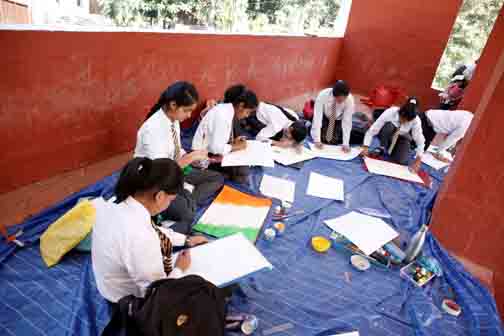 Dehradun, 22 Oct: The morning started at Virasat today with a sit and draw competition in which more than 180 students from various schools participated. The theme of the competition was ‘Gandhi & Heritage’. The schools that participated were DIS, Raja Rammohan Roy Academy, Montessori School, Him Jyoti, Doon Presidency, Army Public School, BS Negi School and Jaswant Modern.
The Dhamal Dance was performed at Virasat today. It is as old as the Mahabharatha. It is popular among the Ahirs of Gurgaon district. It is also in vogue in Mahendargarh and Jhajjar. The dance is rooted in the deeper emotions of the people, is performed on moonlit nights of Phalgun. The dancers assemble in an open space and form themselves into a circle. They start with a song to the sound of Dhamal beats. The songs sung during the dance relate to the burden of love and labour. They depict the villagers’ hopes, aspirations, their love, longings and joys and sorrows. Between fifteen and twenty dancers participate in the dance. Old musical instruments like Sarangi, Been, Dholak and Khartals constitute the orchestra. First of all the orchestra men make a line and start playing folk tunes. The dancers move in front of them emerging right and left when the dance starts.
Then followed a Hindustani Vocal performance by Kaushiki Chakraborty. The journey that started from home under the tutelage of mother Chandana Chakraborty and father Ajoy Chakrabarty lead to her first major concert at the age of 16 at the India Habitat Centre in Delhi. Chandana Chakrabarty, a disciple of Vidushi Meera Bandyopadhyay, a noted Classical vocalist of Patiala Gharana, initiated Kaushiki into the world of Indian music. From the affectionate lullaby to the stringent Taalim, she has been one of the greatest inspirations in Kaushiki’s life.
At a time when all young classical musicians are involved in collaborative music, Kaushiki has been a rather late entrant. But she has more than made up for lost time. Over the last 3 years, she has sung in films and has been part of the hugely popular MTV Coke Studio project.