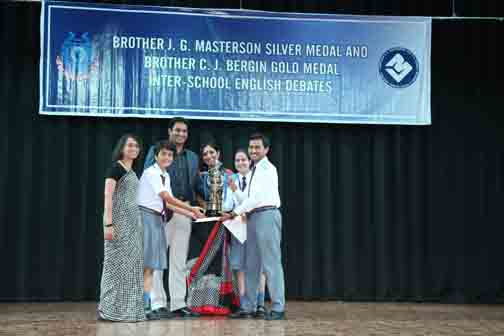 Mussoorie, 11 Aug: The 41st Brother JG Masterson and 43rd Brother CJ Bergin Memorial Debate Competitions were held at St George’s College on 9 and 10 August. As many as 96 participants from sixteen schools participated in this event. The opening ceremony began with a prayer followed by the lighting of the ceremonial lamp. Steve Thomas, Secretary of the Debating Society at St George’s College delivered the welcome address. This was followed by a brief insight into the rules and general instructions and the draw of lots to decide the topics.
The Chief Guest was Nilanjana Bhaduri Jha, co-founder at Opoyi. The Guest of Honour was Rajiv Bansal. He has spent 18 years in Silicon Valley in the US. The debate was conducted in the world schools debate format and was judged by an eminent panel of judges -Yatharth Chauhan, Rahul Pant, alumni of St George’s College, andAbhijay Negi, Amit Joshi and Anubha Joshi.
Among the schools in the debates wereWynberg Allen School, St Joseph’s College, Allahabad, The Doon School, St Joseph’s academy, St Jude’s School, the Scindia School, Sanskriti-The Gurukul School, Welham Boys’,Welham Girls’, Unison World School, Rashtriya Indian Military Academy, Convent of Jesus And Mary, Vantage Hall, Jaswant Modern Senior School and St George’s College, Mussoorie.
The Bro JGMasterson Inter School Debate was conducted over four rounds. On the basis of the maximum marks scored in the first three rounds, the final was conducted between St Joseph’s Academy, Dehradun, and St Joseph’s College, Allahabad. The topic for the debate was – “The Emperors are worse than the Pirates.” In the end, St Joseph’s Academy was adjudged the winner, whileSt George’s College, Allahabad, stood second. Cadet Rubin Singh of Rashtriya Indian Military College was awarded a silver medal for being adjudged the ‘Best Speaker’ of the Bro JGMasterson Inter School Debate.
The finals of the 43rd Brother CJBergin Memorial Debatewasbetween Rashtriya Indian Military College and St Joseph’s Academy. The topic for the debate was ‘This house regrets the dominant narrative of women as non-violent and vulnerable in conflicts and humanitarian crises’.
Rashtriya Indian Military College was ‘for the motion’ and St Joseph’s Academy, was ‘against the motion’.
In the end,St Joseph’s Academy was adjudged winner of the 43rd Brother CJ Bergin Memorial Debate and RIMC was second.
Cadet Dhruv Dahiya of Rashtriya Indian Military College was awarded a gold medal for being the ‘Best Speaker’ of the Bro CJ Bergin Inter School Debate.
Participation certificates were awarded to all participants. Best speaker as well as second best speaker certificates were awarded in every debate of the preliminary rounds, semi-finals as well as the final round.