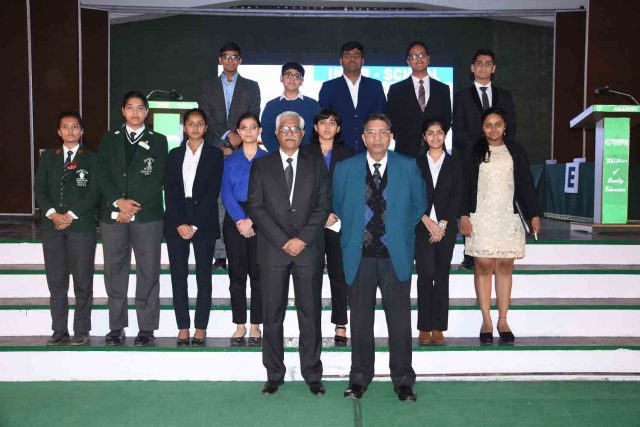 Dehradun, 14 Nov: An Inter-School English Debate, “Spectrum 2019”, was organised by St Thomas’ College, here, today.
Five schools participated in the debate – St Josephs’ Academy, Carman School, Dalanwala, Shemford Doon School, St Thomas’ College and St Jude’s School.
The topic under fire was: Private Tuitions are a Necessary Evil. The topic was given to the schools a day before to prepare. A ‘Turn Coat’ round was also held, under which one student per school was permitted to speak and present his/herviews on different topics selected through a random chit picked by the speakers. The speakers spoke for one minute in favour of the motion and at the stroke of the bell immediately ‘Turned Coat’, i.e. start speaking against the motion.
The turn coat round topics were: Punishment In Schools Must Not Be Abolished, Games Must Be Made Compulsory In Schools, History Is Not A Dull Subject, Gents Are Considered To Be Better Teachers Than Ladies, and Home Work Should Be Abolished In Schools.
St Thomas’ College was adjudged the winner, but being the host school did not compete for the Overall Running Trophy. St Joseph’s Academy was declared the winner, while St Jude’s School was the Runner-up. The Best Speaker for the motion was Payal Mehrotra from St Joseph’s Academy and Daniel Imbert of St Thomas’ College was presented with the best speaker award for against the motion as well as in the turncoat category.
The Chief Guest was Dr SC Biala, Principal, Cambrian Hall, who gave away the prizes. The judges were V Kalia, ex-Senior English Teacher, St Josephs’ Academy; Dr Vineeta Sharma, Senior English Teacher, Cambrian Hall; and Shubhra Sharma, Senior English Teacher, Touchwood School.
The vote of thanks was proposed by Principal RV Gardner, ex-MLA.

Garhwal Post has established itself as a credible, balanced and forward looking newspaper in India. Based in Uttarakhand, the daily is read by the aware, socially and culturally responsible, high-income elite of society.
Contact us: info@garhwalpost.in
polish dating manchester sexy wife date night