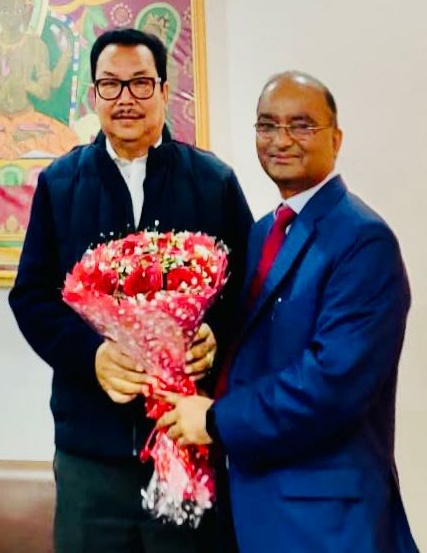 Shimla, 29 Dec: CMD Nand Lal Sharma, SJVN, held a meeting today with Deputy Chief Minister of Arunachal Pradesh Chowna Mein in New Delhi to discuss the Road Map for development of Hydro Electric Projects. Pursuant to efforts of Union Minister of Power RK Singh, the State Government of Arunachal Pradesh has accepted allotment of 5 Hydro Electric Projects having total capacity of 5097 MW to SJVN, for which MOU would shortly be signed. AK Singh, Director (Finance), SJVN, was also present at the meeting.
The Projects, namely Etalin HEP (3097 MW), Attunli HEP(680 MW), Emini HEP(500 MW), Amulin HEP(420 MW) and Mihumdon HEP (400 MW) are located in the Dibang Basin of Arunachal Pradesh. Sharma stated that he has always been advocating the concept of the Integrated River Basin Development Approach, wherein allocation of Hydro Projects in One Single River Basin to One Developer would enable optimum utilisation of Manpower, Infrastructure and Financial Resources. He expressed satisfaction that this novel concept had been accepted by Government of Arunachal Pradesh in allocation of these projects.
The CMD assured that SJVN has a proven track record of Designing, Constructing and Operating Mega Hydro Projects in challenging geographic and climatic conditions. Development of these projects, involving tentative investment of Rs 60,000 crore, would be commissioned by SJVN in the next 8-10 years. On commissioning, these projects are expected to generate about 20,000 Million Units of clean energy annually on cumulative basis. The DPRs of some of these projects have already been prepared, while some are in Survey and Investigation Stage.
The Deputy Chief Minister assured full support for execution of these projects.

Garhwal Post has established itself as a credible, balanced and forward looking newspaper in India. Based in Uttarakhand, the daily is read by the aware, socially and culturally responsible, high-income elite of society.
Contact us: info@garhwalpost.in
https://garhwalpost.in/free-hookup-sites-in-michigan/