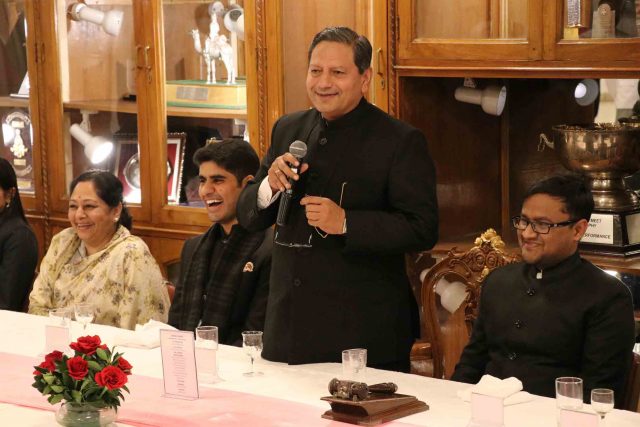 The week that went by saw the first snowfall of the season, and though it was not enough to make a snow-woman, officers of the Phase 1 (2019 batch of the IAS) and Phase 3 (MCTP) at the LBSNAA were delighted to feel the flakes on their faces, pose for innumerable photographs, make short videos for their friends and families, and generally scamper around, even as a few of them slipped and hurt themselves! Most of the Phase I officers were very keen to get a glimpse before the Winter Study Tour, and indeed most of their groups got an opportunity to see the snow, and for most of them, it was their first ever encounter with this white fleece ! The other highlight of the week was the Annual Formal Dinner at the Officers Mess – a ritual and a rite of passage before officers embark on their Army attachment. This four-course silver service dinner has been part of the ICS and IAS tradition, and we do have the signed menus from the service dinners held at Metcalfe House before the Academy shifted to Charleville at Mussoorie. Unlike the days of the Raj, it ends with an (apple juice) toast to The President (of India) and to The Service (IAS) and, this time, it was felt that many more toasts could have been raised, as the antiquated tradition of a speech with every toast had been dispensed with! The internet is full of stories of how some Senators fell off to sleep during some long winded speeches at the Capitol Hill. However, a light hearted after dinner speech has to be made to ensure that the evening ends on a light and friendly note! Before the first formal meal, there’s always some apprehension about the event, especially as everyone has to keep track of when the Chief Guest starts and stops eating! The latter is more important, for as soon as the Chief Guest crosses his fork and knife, that particular course comes to an end, and the bearers withdraw the plates from the table. Usually in settings as large as the Academy, the Mess also displays a Green Light to indicate that the Chief Guest is still eating, but when the light turns red, everyone must drop their forks immediately. In many ways, it is the responsibility of the Chief Guest to eat slowly and ensure that s/he starts eating only when everyone has been served! A commonly held view in the Academy is that the formal dinners have continued on account of the unholy nexus with the owners of Ganga Dhaba so that they can make a bumper sale of parathas on that night. I must confirm officially that this is not the case! After all the courses have been served, the President of the Mess Committee strikes the hammer to draw everyone’s attention and raises a toast to The President and to The Service, the glass is held up and the juice is taken in one gulp. Except for a few years when the Academy had a Bar, the toast has been non-alcoholic. This is the perfect Indianisation of tradition: toast we must raise, even if it is not a bubbly! Perhaps, if the Academy was gifted some processed grapes from the Ministry of Food Processing Industries, we could seek a query on how to make optimal use of these product samples. The after-dinner speech has to be light hearted, yet convey the gravitas of the occasion, and explain to the officers the rationale of such and similar occasions, especially in their interaction with the Army, the diplomatic corps and visiting delegations of multilateral organisations. The defence forces take their Mess etiquette very seriously and the Academy is keen that their traditions are respected by our officers. The purpose of practicing for a sit- down meal is polite conversation, putting the guest at ease, and also feeling comfortable when invited to such an occasion. Earlier, on state days, and during the India Day celebrations, the officers sat down on the ground and ate their food in bio-degradable, eco-friendly plates (pattals) made of leaves. Here the officers took turns to serve their colleagues themselves, but the basic rule of waiting for everyone to be served before the formal eating began was followed, albeit informally. Although one was apprehensive about how the officers would react to this annual ritual, the feedback was quite positive. The four-course meal, with plates being changed after every course, and the array of knives, forks, spoons and glasses was a novelty for many, but as there are several YouTube channels which explain how the cutlery has to be used, they were at ease. The escort officers and the faculty members and their spouses also had a unique opportunity to interact with each other on a one to one basis. The idea was to feel comfortable in a variety of different settings, and the ability to be absolutely comfortable with the host/guest. An IAS officer is expected to feel at home in a range of settings – from the panchayat Bhawan and the foot path to the high table at an international workshop on carbon credits, or a seminar on commodity markets, or a conference on Human Rights. The feedback suggests that for most of them it’s a case of ‘yeh dil maange more’!