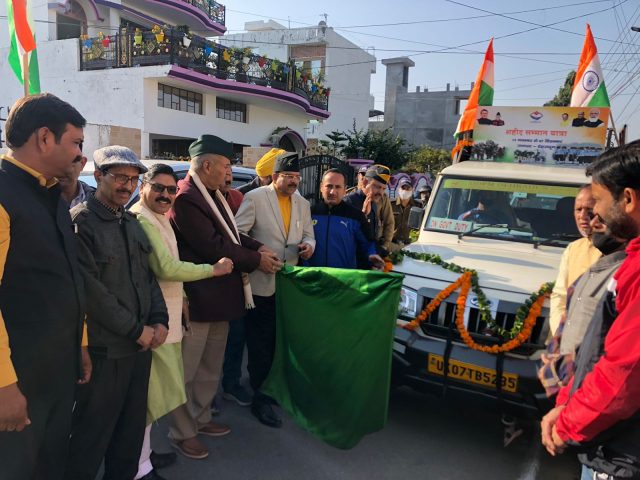 By Our Staff Reporter
Mussoorie, 25 Nov: As part of the ‘Shaheed Samman Yatra’, which has been underway from 15 November across the state, soil was collected from the courtyard of Martyr Major Vijay Ahlawat from Vijay Colony, Dehradun. It will be taken for the construction of a grand military shrine to be built in Village Guniyal.
Union Minister of State for Defence Ajay Bhatt and State Sainik Welfare Minister Ganesh Joshi were present on the occasion. This is to symbolise the reverence for soldiers in the BJP. During the ongoing Shaheed Samman Yatra, urns containing soil from the courtyards of 1734 martyrs from across the state are being brought to the military shrine. During this, the families of the martyrs are being felicitated at public programmes.

Garhwal Post has established itself as a credible, balanced and forward looking newspaper in India. Based in Uttarakhand, the daily is read by the aware, socially and culturally responsible, high-income elite of society.
Contact us: info@garhwalpost.in
free meet up sites https://garhwalpost.in/find-local-singles-in-my-area/