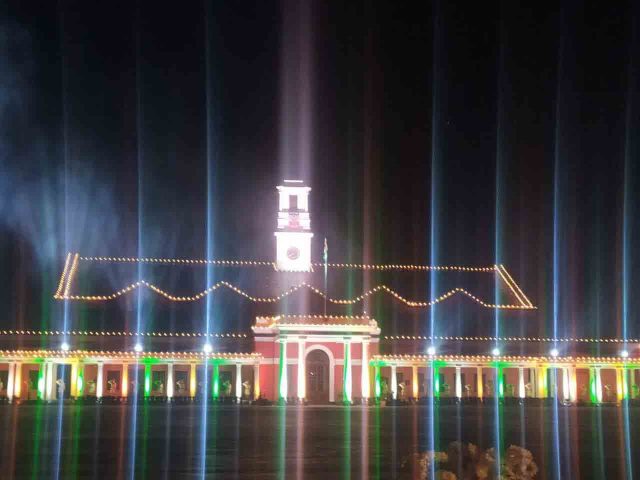 Dehradun, 11 Dec: The POP at IMA is a spectacular event showcasing the training imparted to future military leaders. As a build up to the Parade, a splendid “Son-et-Lumiere” show, based on the theme “Indian Military Academy Through the Ages”, was held today, which took the audience on a nostalgic journey of the Academy from its inception in 1932 to its present status. It depicted what the brave alumni of this Academy achieved over decades in varied actions on and off the battlefield. The magnificent show, combined with the effects of brilliant light and sound, mesmerised the august gathering.
The “Son-et-Lumiere’’ was attended by Lt Gen SK Saini, the Reviewing Officer of the Parade, along with the parents of the passing out course and the visiting dignitaries.
The event was held at the sprawling Drill Square which provided the pristine environment for the conduct of the event. The Sound and Light Show conducted at The Indian Military Academy is one of its kind. It is done in front of the famous Chetwode Building, covering a stage of more than 400 feet. It depicts the history of almost nine decades of Indian Military Academy. People witness and experience the saga of unparalleled discipline, bravado, camaraderie and valour of the heroes trained and honed into military leaders at this prestigious institution. It reflects the rich heritage and its iconic legacy.
The show is a fusion of action, lasers, light, shadows, fireworks, all merged into an impressive mixed of audio visual display against the majestic silhouette of the Chetwode Building. The 40 minute long programme left the parents of the Passing Out Course full of national pride and thrill at their wards joining this elite profession of arms.