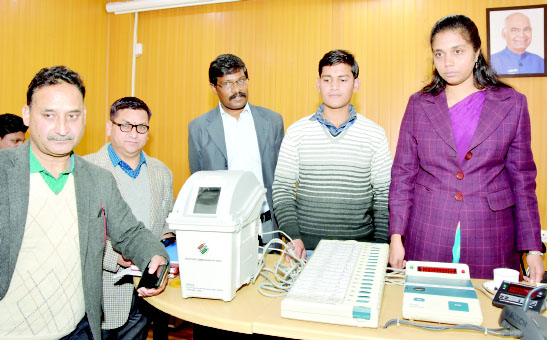 By OUR STAFF REPORTER
DEHRADUN, 31 Jan: Chief Electoral Officer Saujanya said, today, that the names and descriptions in the voters’ list coulb be verified over the Voter Helpline number 1950. This is a toll free number, which would be formally launched on 1 February. Contact may be established on this toll free number for getting Voter I-Cards made and obtaining information related to the BLO and polling booth.
She was speaking at a press conference held at the Media Centre in the Secretariat. Information regarding the figures of voters as per the 31 January, 2019 final publication of the special brief revision of the Photo Electoral Rolls, on the basis of the qualification date of 1 January 2019, was provided.
The Chief Electoral Officer stated that final publication of the special brief revision had been done. However, applications for enrollment in the voter list could be submitted. This was not the final voter list. The elections had not been announced yet. The electoral rolls would be finalised till the last date of nomination in the election.
However, for enrollment in the voters’ list or to get any amendments done, the person concerned would have to apply 10 days before the last date of nomination. Instructions have been given to place special focus on female voters and voters in the age group of 18-19 years.
The CEO disclosed that, in the coming election, a hundred per cent VVPAT machines would be used. In order to provide information about the EVM and VVPAT to the voters, mock poll and display programmes are being organised in the entire state. District Election Officers have been given instructions to organise voter awareness programmes through SWEEP. Directions have been issued for transfer of officials related to the elections on the basis of the standards set by the Election Commission of India. An EVM and VVPAT machine were also displayed at the PC.
Providing the number of voters on the basis of the qualification date of 1 January, 2019, Saujanya said that, after the revision, the total number of voters in the state was 76,28,526. Among these, the male voters were 39,84,327, female voters were 36,43,969 and transgender voters, 230. The number of voters in comparison to the draft publication had increase by 65,696. The E-P ratio was 64.40 per cent in the draft, while in the final publication it was 68.30 per cent. The sex ratio was 912 in the draft, while in the final publication it was 915. The total number of polling stations was 11,235, out of which 2,548 were in urban areas and 8687 in rural areas. The most remote polling station is in Tharali assembly constituency, 40-Primary School, Kanol, and in Badrinath assembly constituency 43- Primary School, Dumak.