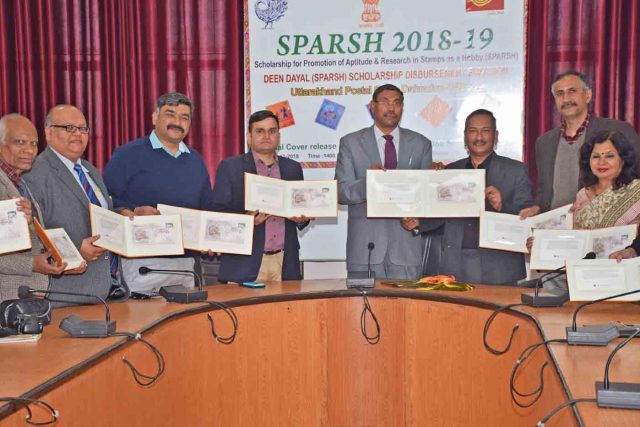 DEHRADUN, 18 Dec: ‘The Wildlife Preservation Society of Northern India’ was launched at the instance of PD Stracey, IFS, on 13 April, 1958, with headquarters in Dehradun. The Society aimed to tackle the problem of India’s vanishing wildlife from the ‘public’ side. Maharaja Pratap Singh of Nabha became the first President of the Society. It published its first wildlife journal, titled ‘Cheetal’, on 13 October, 1958. The insignia of a Cheetal bust was designed by Maharaj Kumar of Rajpipla for the ‘Cheetal’ journal. In April, 1960, the society was expanded into an all India body and was re-named ‘The Wild Life Preservation Society of India’. The constitution of the society was adopted on 15 April, 1960. The Society was re-registered in 2017 as ‘The Wildlife Preservation Society’ (WPS).
To commemorate the Diamond Jubilee of the Society, a Special Postal Cover and Special Cancellation was issued by Department of Posts, Uttarakhand Circle, here, at the Dehradun GPO, today. The cover was released by Director, Postal Services, Satyakaam, President, WPS, Rashmikant Shukla, Executive, Vice President, WPD, Dr Prashant Singh, APMG Anusuiya Prasad Chamola and other dignitaries.
Rashmikant Shukla spoke about the achievements of the society towards the preservation of wildlife. He added that WPS was the second oldest wildlife society in India after BNHS and its journal, “Cheetal”, one of the oldest in the country. During the release function, Department of Posts awarded the Deen Dayal SPARSH Scholarship to the top forty children from Uttarakhand ranging from class six to nine in the promotion of Philately.
Abhai Mishra addressed the students and motivated them to pursuing philately as a hobby. Assistant Post Master General Anusuiya Prasad Chamola stressed on the need of philately and its contribution towards the all round development of a child. The function was conducted by Hardev Sharma, Assistant Director.

Garhwal Post has established itself as a credible, balanced and forward looking newspaper in India. Based in Uttarakhand, the daily is read by the aware, socially and culturally responsible, high-income elite of society.
Contact us: info@garhwalpost.in
fun dating activities https://garhwalpost.in/gay-online-hookup-sites/ https://garhwalpost.in/dating-terminology/