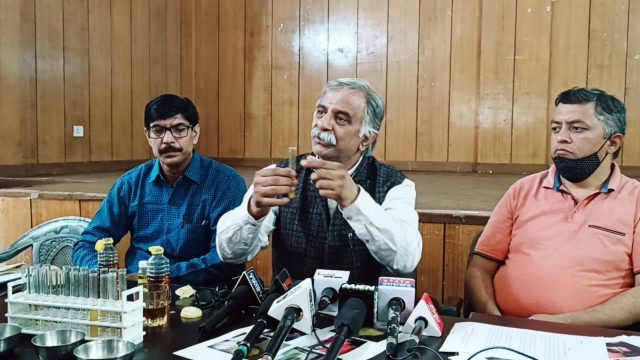 By Our Staff Reporter
Dehradun, 28 Oct: SPECS held a campaign on testing of adulteration in Mustard oil from June to September. Volunteers collected 469 samples from Dehradun, Vikas Nagar, Doiwala, Mussoorie, Tehri, Uttarkashi, Rishikesh, Srinagar, Rudraprayag, Joshimath, Gopeshwar, Haridwar, Jaspur, Kashipur, Rudrapur, Ram Nagar, Haldwani, Nainital, Almora and Pithoragarh. As many as 415 samples were found adulterated out of 469 samples.
This was stated at a press conference by Dr Brijmohan Sharma, Secretary, SPECS.
According to him, 100% samples were found adulterated in Mussoorie, Rudraprayag, Joshimath , Gopeshwar and Almora. Adulteration was found in Jaspur (40%), Kashipur (50%), Uttarkashi (95%), Dehradun (94%), Pithoragarh (91%), Tehri (90%), Haldwani (90%), Vikas Nagar (80%), Doiwala (80%), Nainital (71%), Srinagar (80%), Rishikesh (75%), Ram Nagar (67%), Haridwar (65%) and Rudrapur (60%).
The adulteration is due to yellow colour i.e. Metanil yellow, white oil, Castor oil, soybean and groundnut containing cheap cotton seed oil and excess percentage of hexane.
The reason for a large number of health problems is because of the food, which includes the quality of the oil the food is cooked in. Mustard oil is found adulterated with cheap argemone oil which causes dropsy, stated Dr Sharma. The slightest of adulteration can cause irritation or burns, which may not seem like a big deal immediately, but can have harsh effects in the long run.
He also described how to test mustard oil at home. Take at least one cup of oil and keep it in a refrigerator for 2-3 hours. If the oil freezes with some white content, then the oil contains adulteration. There is a rubbing test to check the quality of the mustard oil. Pour some oil on the palms and rub it. If there are any traces of colour and some chemical smell, then it means oil contains some spurious substance. Boil some oil and, if the top layer is full of effervescence means adulteration. Also, take a sample and put drops of lemon in it. If the physical condition changes, it means adulteration.