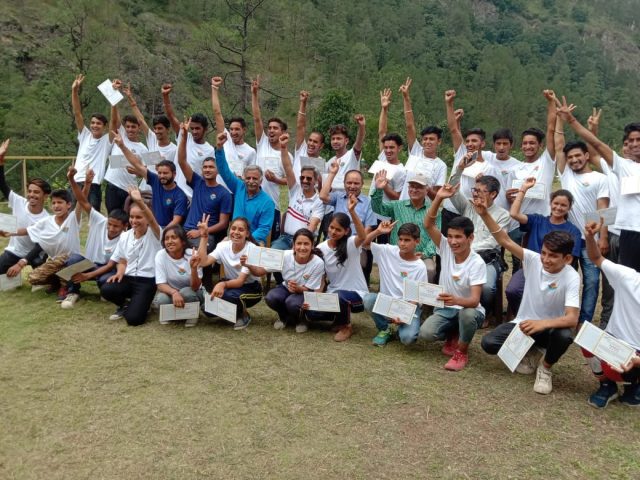 DEHRADUN, 7 Jul: As the monsoon clouds soar in the remote Assi Ganga valley of Uttarkashi, the villagers from the remote villages of Agoda and Dasna are silently packing their belongings to leave their villages with their cattle in tow for their routine migration to the forest dwellings of Siyanli and Manjhi, between 4 to 11 kms from these villages. This is not for the traditional chow-masa (four months) practice of migrating to the natural resource rich areas – the reason is that these villages are facing the threat of rock fall and slope failure which gets amplified during the rainy season. The struggle faced by these communities to survive during the monsoon was highlighted by the presentations of the Hazard Vulnerability Survey conducted by youth from the same villages who participated in a 12 day training programme on Community Based Disaster Response. Taking into consideration the need for capacity building of vulnerable mountain communities in disaster response, the Society of Pollution and Environmental Conservation Scientists (SPECS) decided to intervene by sponsoring a pilot training programme for the villages of the Assi Ganga valley. Overall, 29 youth including five girls participated in the pilot programme organised by the Nanda Devi Institute of Adventure Sports and Outdoor Education at its base camp in Kuflon, located in the disaster prone Assi Ganga valley of Uttarkashi. Considering the objectives of the programme, the Nehru Institute of Mountaineering extended its support by allowing entry to its rock-climbing training area at Tekhla. The Red Cross Society of Uttarkashi also pitched in with its expertise to provide inputs on emergency medical response. During the 12 days of training, the participants were trained in basic rock and rope craft including techniques of casualty evacuation. The programme is complimentary to the efforts of the state government but is far more comprehensive in terms of actual transfer of technical skills required during disaster emergencies. Speaking on the occasion of the graduation ceremony of the course, Dr Brij Mohan Sharma stressed on the need to motivate the youth to actively participate in learning lifesaving skills and to avoid remaining passive receivers of search and rescue services in case disasters occur in their native villages. The various knots used in the rope craft should be transformed into interesting games for the village children and women so that they are aware of their use during rescue and evacuation. He also stressed on the need to include rope and rock craft based search and rescue along with medical first response as part of the course curriculum of high school education. The physical education instructors employed in schools, especially in the mountain districts, also needed to be trained in these crafts, he suggested. Nanda Devi Institute was established in 2011 and operates from its bases in Uttarkashi and Chamoli districts. The institute has been technically evaluated and certified by the Nehru Institute of Mountaineering. In order to tap the manpower resources of the ex army and para military forces, Nanda Devi Institute has been enrolling renowned mountaineers and senior instructors from the High Altitude Warfare School of the Indian Army, who specialise in the art and craft of survival in the mountains, but are unable to find appropriate platforms to share their skills after retirement. At present, the training division of the Institute is headed by Padma Shri awardee Mohan Singh Gunjiyal, who is retired from the ITBP and is a recipient of the prestigious Tenzing Norgay National Adventure Award. The field training is headed by Capt Laxman Singh Negi, an experienced mountaineer and retired senior instructor from the High Altitude Warfare School and Nehru Institute of Mountaineering. NDI has had the honour of providing search & rescue training to the State Disaster Response Forces of Uttarakhand as well as Uttar Pradesh. The institute is also involved in training local youth in bird watching and also conducts courses in basic mountaineering and adventure orientation for the general public. Dr Sunil Kainthola, the Founder-Director of the institute, who personally supervised the course for the entire duration, expressed the need for attitude change among the mountain communities that are becoming passive consumers of the S&R services and are averse to actively participate in designing and developing the disaster response system at the grassroots level. As an example, he shared the experience of interacting with some Gram Pradhans of the Assi Ganga Valley, who were more interested in getting some material than discussing the objectives of the programme in the Gram Sabha to select desired representation. The ongoing trend is dangerous and whatever is happening in the name of capacity building needs a serious process audit from the State Disaster Mitigation and Management Centre. The 12-day training programme was conducted at multiple locations in the Assi Ganga valley with a scenario based approach of casualty evacuation. The participants learned enough technical skills to actively assist as disaster response volunteers under the supervision of S&R professionals during disaster emergencies. Interestingly, the instructors detailed for training were from the same valley which helped in creating special inter village bonding among the participants. Dharmendra Singh Negi, a senior adventure professional and a regular guest instructor at NIM, from the village of Uttron in Assi Ganga valley, was the Chief Instructor of the course. Kamlesh Gururani of the Reliance Foundation also contributed by teaching the various phases of the disaster recovery cycle and the need for understanding disaster vulnerability and hazard mapping. The ball is now in the court of decision makers who must understand the need for tender based capacity building to a process based approach, emphasises Dr Sunil Kainthola.

Garhwal Post has established itself as a credible, balanced and forward looking newspaper in India. Based in Uttarakhand, the daily is read by the aware, socially and culturally responsible, high-income elite of society.
Contact us: info@garhwalpost.in
https://garhwalpost.in/east-texas-hookup/ https://garhwalpost.in/free-meet-up-sites/ young woman seeks older man