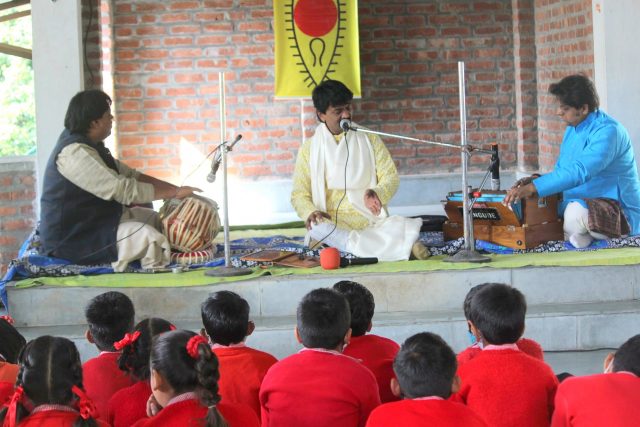 Dehradun, 19 Nov: The Society for the Promotion of Indian Classical Music And Culture Amongst Youth, SPIC MACAY, hosted a Hindustani Vocal performance by Pandit Jayateerth Mevundi for the students of John Martyn Memorial School, here, today. The programme was supported by SRF Foundation.
Pandit Jayateerth Mevundi mesmerised the audience with his enthralling Hindustani Vocals. He was accompanied by Sumit Mishra on Harmonium and Santosh Telurkar on Tabla.
Pandit Jayateerth Mevundi is one of Kirana Gharana’s leading vocalists. Born in Hubli, his initial training began at home, informally singing bhajans and other devotional music. According to him, there was no musician, as such in his family, although his family members would listen to songs on the radio, identify the ragas and appreciate music in general.
Mevundi has won several accolades, including the Pt Jasraj Gourav Puraskar in 1995, the Mewati Gharana Sangeet Gourav Puraskar in 2000, the Shanmukhananda Sangeet Shiromani Award in 2005, and the prestigious Young Maestro award from President Abdul Kalam in 2007. He is an ‘A Top’ graded artist at All India Radio (AIR).
Earlier, Pt Jayateerth performed at the National Institute for the Empowerment of Persons with Visual Disabilities, Dolphin PG Institute, Omkarananda Institute of Management and Technology, and Mussoorie International School.