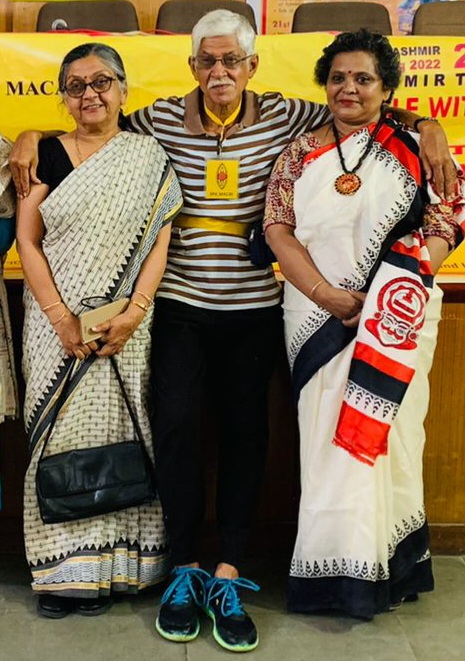 Dehradun, 20 Sep: SPIC MACAY’s Founder and Padma Shri Awardee Professor Kiran Seth has reached Dehradun while on his All-India Solo Cycle Yatra that commenced from Kashmir on 15 August. Addressing the media at a press conference, today, Dr Kiran Seth disclosed that he has already passed through Kashmir, Jammu, Pathankot, Ludhiana, Chandigarh, Ambala, Yamuna Nagar and Saharanpur before arriving in Dehradun on his bicycle.
As a part of the Solo cycle yatra, the 73-year-old will visit over 200 districts and cities from Kashmir to Kanyakumari. He will also reach out to the children in the rural and urban settings of the country while on his pan-India cycle excursion.
Dr Kiran further stated that, on 19 September, he started on his bicycle from Sunderpur in Uttar Pradesh and entered Dehradun through the RTO check post. On entering, he was welcomed by the many cycling enthusiasts of the city, who then accompanied him on this leg. He was greeted in the city by the students of Graphic Era, Hilton School, Universal Academy, Doon International School, Carman School and other educational institutions on his route. Dr Kiran had lively interactions with the students and their teachers, as well as detailed discussions with SPIC MACAY volunteers and coordinators on the best ways to take the movement forward.
He added, “For this All India Cycle Yatra, I’ve bought a simple cycle worth Rs 7000, which is without any special features like gears or disc brakes. I’ve spent Rs 500 for necessary gear and I am only carrying 3 pairs of clothes. By this, I want to spread Mahatma Gandhi’s message of simple living and high thinking.”
During his stay in the city, Dr Kiran Seth is scheduled to address a gathering of students and educators at The Doon School, Mussoorie International School, and the staff and probationary officers at Lal Bahadur Shastri National Academy of Administration. He will also have discussions with school and college principals and vice chancellors of universities.
During the press conference, Dr. Seth also informed the media about the four objectives of his All-India Solo Cycle Yatra, which are to celebrate India’s composite heritage and culture, to promote cycling for good health and a clean environment, to spread Mahatma Gandhi’s message of simple living and high thinking, and to induct more volunteers into the SPIC MACAY movement.
Dr Seth’s journey to Rishikesh will be flagged off on the 22 September by Governor Lt General Gurmit Singh (Retd). From Rishikesh, he will cycle to Haridwar, Roorkee, Muzaffarnagar, Meerut and Delhi. He aims to conclude this yatra at Kanyakumari by 31 December, 2022.
On 2 October, on the occasion of Gandhi Jayanti, Dr Kiran Seth aims to reach the national capital, New Delhi.
Sharing with the media his planning for the pan-India cycle expedition, 73-year old Dr Seth declared, “I could only plan on undertaking this expedition because of the yoga that I’ve been doing since his childhood. Yoga has given me the ability to embark upon such excursions at this age, and I consider cycling as meditation and not just an activity or exercise.”
He wants to convey the same message to youngsters about how Indian culture and heritage made him the man he is today. He also wants them to learn about India’s glorious composite heritage.
He pointed out, “Nowadays, cycling is more like a trend amongst the youth rather than an exercise so I am using this trend to attract the youth and make them aware of SPIC MACAY and the purpose of our initiative which is to have every child experience the inspiration and mysticism embodied in Indian and World heritage and also make them aware of the benefits of cycling, both, physically and environmentally.”
Born in 1949, Kiran Seth is an Indian academician and former Professor Emeritus in the department of Mechanical Engineering at the Indian Institute of Technology Delhi. He is most known for founding SPIC MACAY in 1977, a non-profit organisation that promotes Indian classical music, Indian classical dance, and other aspects of Indian culture, amongst youth all over the world through its 500 chapters and conventions, baithaks, lectures, and musical fests. In 2009, he was awarded the Padma Shri by the Government of India for his contribution to the Arts.
SPIC MACAY is a voluntary, apolitical, youth movement that conducts more than 5000 programmes a year across 100 cities in India and abroad. It organises programs including classical music and dance concerts, workshops of different art forms like classical music, dance, crafts, yoga, and folk arts, film screenings, talks, heritage walks, and theatre shows in educational institutions only.