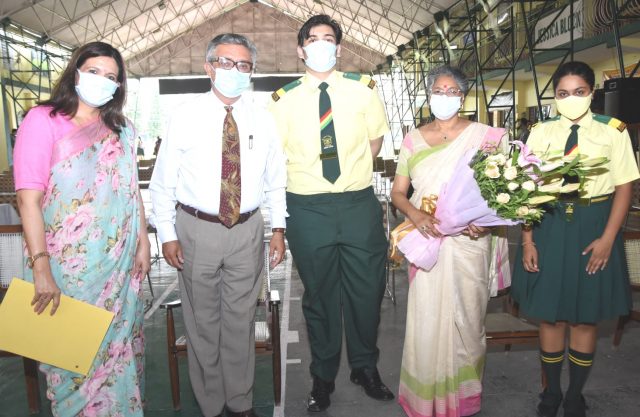 Dehradun, 1 Sep: After a difficult year, students’ faces broke into smiles this morning when they walked to the stage to put forth their ideas in the St Jude’s Senior School Inter House English Debate.
This was the school’s first offline function after almost two years. All Covid safety norms were strictly followed.
The Chief Guests were Mr and Mrs Hanvey. Mr C Hanvey is the Director of The Doon Global School, Dehradun, and Mrs S Hanvey, the Principal.
The topic of the debate was: “The U.S. decision to withdraw from Afghanistan in the right one”.
The debate was keenly judged by V Kalia, Parul Sharma (Ann Mary School) and C Hanvey. The debating session was handled by the Master of Ceremonies N Mehra and the Time Keeper, Amitosh Singh.
Neal Gardner from Gardner House was declared the Best Speaker. Shivaansh Saxena from Khanna House impressed everyone with his wisdom and witty remarks, receiving the 1st Runners Up award. The third position was bagged by Aduvet Raizada from Lyons House. The overall winner was Gardner House and Howard House, the Runners Up.
C Hanvey, in his address, appreciated the standard of Debate and S Hanvey gave away the prizes. Principal VR Gardner proposed the vote of thanks.

Garhwal Post has established itself as a credible, balanced and forward looking newspaper in India. Based in Uttarakhand, the daily is read by the aware, socially and culturally responsible, high-income elite of society.
Contact us: info@garhwalpost.in
https://garhwalpost.in/top-3-dating-websites/ craigs list singles polish single ladies