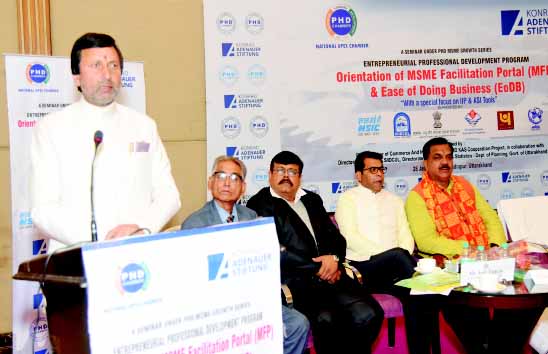 By OUR STAFF REPORTER
DEHRADUN, 29 Jan: The PHD Chamber Uttarakhand State Chapter in collaboration with Konrad Adenauer Stiftung and Directorate of Industry and SIIDCUL is organising a series of seminars for MSME stake holders to update and provide information that would help resolve their issues by way of dialogue. Various seminars cum workshops under the PHD-KAS Cooperation Project in the state of Uttarakhand are being organised.
A seminar in this series was held on 28 January in Rudrapur on Ease of Doing Business and was inaugurated by Chief Guest Finance Minister Prakash Pant. The panel members included PC Dumka, GM, SIIDCUL, Anand Joshi from Ernst & Young, Dr JS Juneja, former Chairman & MD, NSIC, VK Sharma, Director, MSME, Manoj Gaur, HOD, NSIC, Dehradun, Manoj Tyagi, President, SIIDCUL Entrepreneurs’ Welfare Association Pantnagar and Suresh, President Sitarganj Industrial Association.
The Finance Minister stated that government was committed to bringing the ranking of the state into the top three by the next assessment. He stated that reform evidence scored on only two parameters, for land availability and environment registration. The government was working on solutions unique to Himalayan states. Construction permit issues were also are being addressed. He also pointed out that, till now, more than Rs 20,000 crores of investment MOUs signed during the Investors’ Summit were ready for implementation in the state. These were already being processed under the single window clearance system.
When Moderator Anil Taneja asked those industry delegates to raise their hands who tried to avail the online services under the single window system, only six persons confirmed that they did so. They declared that it was not of much use to them because of problems like non user-friendly system, bugs in the software, unresponsive feedback and grievance system. Unfortunately, none of the authorities from the Directorate of Industry were present to interact and hear such queries from amongst the more than 100 industry delegates who participated.
According to Rajeev Ghai, Co-Chairman, Uttarakhand State Chapter of PHD Chamber, such programmes were important because MSME were viewed as engines of economic growth that promote equitable development, generate employment, contribute to national output and exports, foster new entrepreneurship, and provide depth to an economy’s industrial base. Ghai appreciated the central government initiative to sign an MOU with Japan, recently, for the development of Advanced Model Single Window and its operationalisation in Central and State Governments.
Anil Taneja, Regional Director of PHD Chamber, said that MSME would benefit for this series of seminars, which were planned while keeping in mind the challenges of global competition, export competitiveness and fast technological upgradation. He said it was imperative to free MSME from the hassles of difficult regulatory formalities and implementation of single window system needed to be accelerated. MSME needed to channelise maximum capacity towards productive pursuits so as to compete in the global market.
The seminar by PHD Chamber aimed at providing inputs to the government on giving further teeth to the Ease of Doing Business programme. Discussions were held on addressing the issues and gaps for an effective implementation of the Ease of Doing Business programme under single window system.

Garhwal Post has established itself as a credible, balanced and forward looking newspaper in India. Based in Uttarakhand, the daily is read by the aware, socially and culturally responsible, high-income elite of society.
Contact us: info@garhwalpost.in
dating during pandemic meme craigs list singles https://garhwalpost.in/high-end-matchmaker/