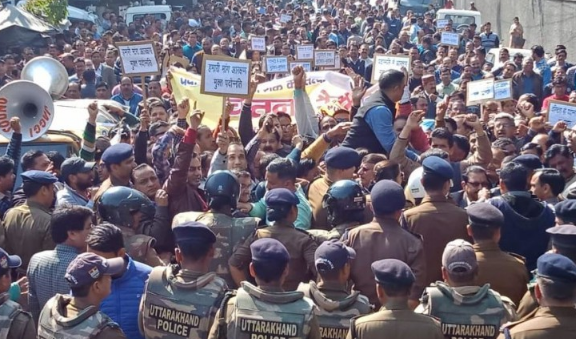 DEHRADUN, 2 Mar: All the warnings to the General and OBC category of state government employees have yielded no result and they have gone on indefinite strike in protest against reservation in promotions. At the same time, the SC and ST category of employees have resumed work ‘in view of the Budget Session of the state assembly’ from tomorrow onwards. If the general category of employees do not return to work by tomorrow, the proceedings of the State Assembly are also likely to be affected. The general and OBC category of employees were given repeated warnings by the state government. In fact, when all efforts to convince them to call off their declared strike failed, Chief Secretary Utpal Kumar Singh issued a ‘No Work, No Pay’ order this afternoon. The order has been issued to all the Additional Chief Secretaries/ Principal Secretaries/ Secretaries/ Commissioners and HODs, as well as to all the treasury officers, to strictly implement the ‘No Work, No Pay’ order. The direction issued is to deduct the pay of those t employees found absent without sanctioned leave with effect from tomorrow. It may be recalled that the general category employees declared a strike with effect from today to protest against reservations in promotion. Work has been particularly affected in the Secretariat. The general and OBC category of employees also took out a rally in support of their demand to enforce promotions without reservations. On the other hand, although the SC and ST category of employees attended duty, today, “in view of the budget session of the state assembly” due to start from tomorrow, they too have threatened the state government with consequences if the reservations are not granted, as in the past, on promotions too! The President of the Uttarakhand SC/ST Employees Union, Karam Ram, had even gone to the extent of threatening that, if the reservations on promotions were not restored, they would convert their religion en masse. The situation has become very critical for the state government, which had earlier declared that there would be no reservation in promotions. The state government’s decision had been upheld in the Supreme Court, too, which had said that there was no provision in the Constitution that could mandate implementing reservations in case of promotions. However, the BJP Government at the Centre probably holds a different view on this and this has resulted in some confusion in Uttarakhand. It has not yet initiated the process of promotions in many overdue cases, which had been held up due to a stay by the Uttarakhand High Court. This delay has led to deep anguish among the general and OBC category of employees, who oppose any reservation in case of promotions. While in Uttarakhand, the population of SC and ST is considerably less as compared to the bigger states in the country, the BJP led NDA Government at the Centre is not likely to risk the ire of the SC and ST communities, particularly at the present.