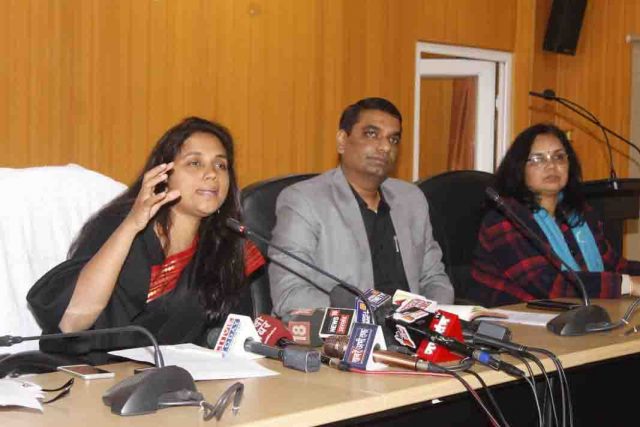 DEHRADUN, 16 Dec: As many as 55 teams of the State Tax Department conducted searches and raids, today, under the leadership of Commissioner, State Tax, Sowjanya, unearthing evaded turnover to the tune of Rs 8500 crores. The department had been receiving information over the past couple of months that some dealers of Uttarakhand were getting registered through fraudulent means and doing business worth crores of rupees through e-way bills. After undertaking investigations confidentially, it was found that 70 firms generated inward and outward e-way bills worth Rs 8500 crore within a short span of 2 months. During the course of further investigation, it was found that 34 out of these 70 firms generated e-way bills showing purchase of machinery and compound dana from Delhi worth Rs 1200 crore and after that these firms showed transactions amongst themselves and with dealers outside the state. Basically, these firms raised the actual value of goods from Rs 1200 crore to Rs 8500 crore through value addition via e-way bills. As many as 26 firms showed sales of chappals (footwear) to other states of Andhra Pradesh, Rajasthan, Tamil Nadu and Maharashtra, while today none of these firms was found to be in existence. It is clear from the above that this fraud extends to other states of Delhi, Haryana, Andhra Pradesh, Tamil Nadu, Maharashtra and Rajasthan as well, the investigation of which is still underway. After the investigation gets over, the report will be sent to these states. Upon investigation into the vehicles used in these fraudulently generated e-way bills, it was found that most of these were registered in Eastern states. This would be further verified with the transport department. In addition to this, the office of the notary who notarised the rent agreement is also under investigation by one team of officers. Actually, a total of 80 persons using 21 mobile numbers and e-mail IDs got 70 firms registered, each with two partners. As per the details provided at that time of registration, all the partners reside in the state of Delhi or Haryana and to get registration done they showed a rented place of business in Uttarakhand state. And individuals used different names in different partnership firms. As proof of the rented place of business, a rent agreement and electricity bills have been provided. Today, during the course of the raid, it was discovered that the owner of the premises never undertook any rent agreement with any such firm. It is pertinent that with the implementation of GST in July 2017 and the subsequent ease of procedure in getting registration done and generation of e- way bills, it is being taken advantage of by such persons. In the largest raid conducted by the State Tax Department till date, 12 Deputy Commissioners, 55 Assistant Commissioners and 55 State Tax officers were involved in this investigation, along with 10 officers of Headquarters, which were part of a core team that was engaged in preparation of this survey and raid for the past 15 days. The members of the core team were Additional Commissioner Vipin Chandra, Anil Singh, Deputy Commissioner Dr Sunita Pandey, Pramod Joshi, Rohit Srivastav, Assistant Commissioner Ranjit Negi, Suresh Kumar along with officers of the Special Task Force unit of Dehradun comprising Deputy Commissioner Shyam Sunder Tiruha and Assistant Commissioner Jaydeep Rawat who performed data analysis work. Commissioner, State Tax, Sowjanya has laid strong emphasis that Uttarakhand will not be allowed to become a safe haven for such fraudulent activities and it shall always be the endeavour of State and Central GST departments to identify such persons with mala fide intentions who evade tax and work fraudulently. The Department will constantly strive to protect state revenue against such frauds.