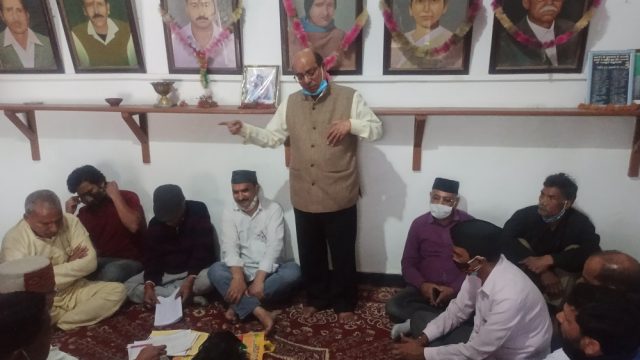 By OUR STAFF REPORTER
Mussoorie, 25 Jul: On the martyrdom day of Sridev Suman, the statehood agitationists staged a sit-in protest at the martyrs memorial here, today, demanding a strong land law in Uttarakhand.
They accused the state governments of selling the state’s land into the hands of the land mafia. They threatened to continue this agitation till the demand is not conceded.
Statehood activists Jaiprakash Uttarakhandi, Kedar Singh Chauhan, Pradeep Bhandari and Mulayam Singh Pahadi said that 80 percent of the land of the state has been taken over by the land mafia. Governments did not pay attention to this. They said that Uttarakhand had been created for the people of Uttarakhand, but this purpose could not be fulfilled. Today, the land mafia had occupied the whole of Uttarakhand. They said that land laws should be made in Uttarakhand on the lines of other Himalayan states. Also present on the occasion were Pratap Panwar, Darshan Rawat, Kuldeep Rauchela, Dr Sonia Anand, Manish Guniyal and many others.

Garhwal Post has established itself as a credible, balanced and forward looking newspaper in India. Based in Uttarakhand, the daily is read by the aware, socially and culturally responsible, high-income elite of society.
Contact us: info@garhwalpost.in
https://garhwalpost.in/best-dating-free-dating-apps/ best online dating for 50