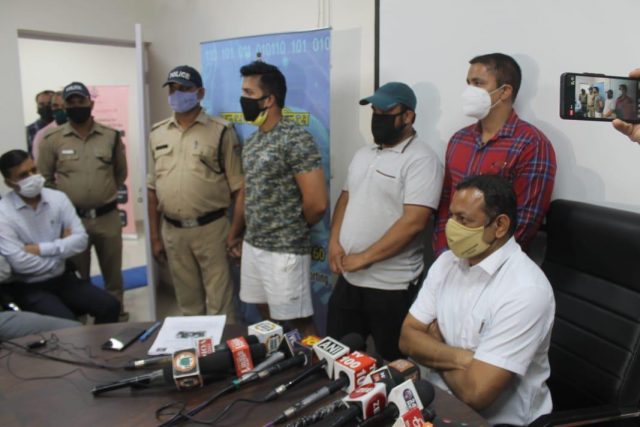 By Our Staff Reporter
Dehradun, 26 Jun: Special Task Force (STF) Uttarakhand has busted an international cyber fraud operating from Dehradun. Two persons have been arrested so far. According to the SSP STF Ajay Singh, the STF has recovered electronic gadgets used for the cyber crime from those arrested. Singh also revealed that the preliminary inquiries had indicated the involvement of operators from the US in this racket and that further probe was underway.
According to the reports, these cyber thugs had made withdrawals from the bank account of a Dehradun woman and emptied the account. She came to know about this when she came to withdraw money from the account. The woman complained to the cyber police station. After preliminary investigation, Nehru Colony Police has registered a case in this regard.
Uma Devi, a resident of Haripur Nawada  had filed a complaint with the cyber police station. She informed the Police that her savings account was with the IIP branch of SBI. When she filled the withdrawal form and submitted to the bank to withdraw the amount, she was told that there was no money in her account. Shocked with what was told to her, she approached the Police. It is known that she had a deposit of around Rs 85 thousand rupees in her account. When she sought details of the withdrawal from the bank, it was found that between 22 December 2020 to 27 January 2021, Rs 84,400 had been withdrawn from her account in different transactions.  She did not even get any message on her registered mobile number.
Inspector of Nehru Colony police station informed that that after registering a zero FIR from cyber police station, investigation was being done by registering a case under relevant provisions of the IT Act.