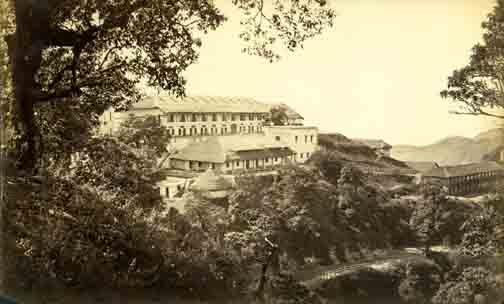 ‘With due respect….’ Then came a pause. After that the question. End of last week, found me at the Valley of Words Literary Festival in the Doon and instinctively, I could tell a curved ball was being flung my way: “Sir you’re always writing about the past –the history of Landour and Mussoorie -have you found anything new or are you just a prisoner of the past?’
That question begged an answer.
Yes! Diving deep into waters of the past gave us Wilson’s coin; or the fact that Gen. Dyer’s widow owned Vincent Hill; or that the Jharipani bat was the world’s smallest bat and Maharaja Daleep Singh dwelt in Whytbank Castle and not in Castle Hill and much more. The other day I heard that somewhere in the hill station was a Sticke Court.
All we were given, thus far, was a single line in Body cott’s Guide to Mussoorie of 1907: ‘A Sticke Court was added to the Himalaya Club in 1906, which was placed at the disposal of the members free of charge.’ Of course we went on to repeat it in the 1992 Mussoorie & Landour: Days of Wine & Roses. Done and dusted! Forgotten about, that’s that or so I thought.
Up until last week, when twenty-five years later, David Lloyd, an investment banker in the UK, brought out a limited edition of Nigel a Brassard’s book for me (No.90 out of the 200 printed) The Rise and Fall of Sticke Tennis.
‘Ganesh there are just two Sticke (pronounced Stickay) Courts still around in India: one in Shimla and the other in Mussoorie!’ gushed an enthusiastic David. Now if truth were told, I had, at least not so far, even heard of the game.
Off the two of us went to the original Himalaya Club (now renamed the Himalaya Castle Hotel) and walked straight into the Smita Vaish – the owner’s affable daughter.
She had not heard of it either.
‘There’s a large hall upstairs, where we sometimes play badminton!’ She says with a smile, gets into her car and departs.
Going up a flight of steep stairs, an old lock is opened. The doors swing open. We stand silent. Instinctively we know this is it – a part of history – the real thing. This was where, once upon a time, the soft ball bounced from one end to the court to the other.
A hundred years later, Nigel’s precious book fills up the rest: ‘It was a simple and highly sociable game and can be played by people of different abilities.’ The advantage of a covered game meant it could be played in any weather, any time.
Sticke tennis and lawn tennis were both discovered in the 1870s. Though fifty years later, the two games had taken two entirely different paths. In cold places like Mussoorie, with not many choices for folks who stayed on, life in winter, could, at times, be dull and lonely, leaving one with the choice of either hibernating like a bear or playing tennis in shirt sleeves after sunset under the luxury of a warm covered roof. Most preferred the later.
Two months after his arrival on 2nd December 1884 Lord Dufferin as Viceroy in Bombay, we hear: ‘D. was happy this afternoon in opening his own particular tennis court. Several gentlemen in scarlet uniforms attend to pick up the balls, but they are to be exchanged for small boys, lightly clad.’ Dufferin had no problem with their attire, but ‘a higher authority has commanded that they must be draped.’
In far off Shimla, by April 1887, the Viceregal Lodge (now the Indian Institute for Advanced Studies) was ready with a Sticke court. We learn, it was ‘a great boom to all the young men there.’
David tells me of a fresh entrant in the Delhi office, who heard of a ‘Rocket Court’ in the south. Quietly he asked for a transfer half way across India, hoping to discover the place where the Tipu Sultan – that Tiger of Mysore –may have tested his artillery shells.
‘Guess what he found?’ asks David, answering his own question: ‘No rockets! Only a racquet court – plain and simple as that could be!’