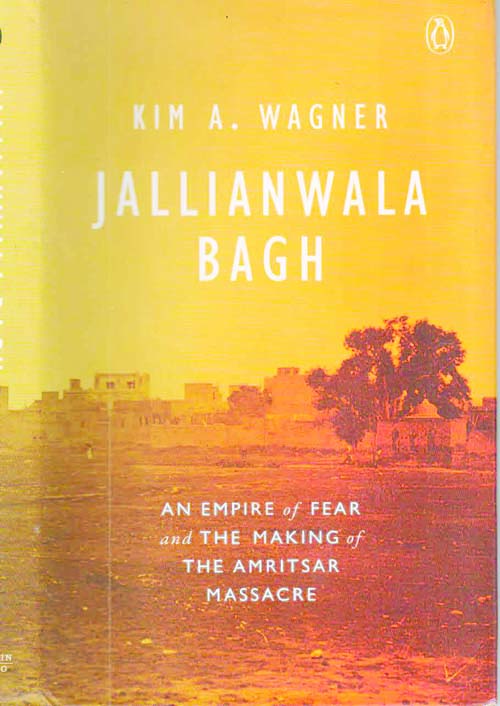 By Arvindar Singh
Jalianwala Bagh: An Empire Of Fear And The Making Of The Amritsar Massacre; Kim A. Wagner; Penguin Viking; Rs 599; 2019; Pp 325.
The carnage of innocent lives at Jalianwala Bagh, Amritsar on 13 April 1919, stand out as one of the turning points in the struggle for freedom from British rule. Some learned historians regard it as the crossing of the Rubicon in India`s War of Independence. Since the centenary of this gory event falls this year, a good number of books have been published about it.  Kim A Wagner, the author of this work is a historian of note who teaches British Imperial History at the Queen Mary University of London. Describing the Jalianwala Bagh massacre Wagner said in an interview, “Rather than being an unprecedented event, it revealed the racial logic of colonial violence.” He puts the casualty figure between 500 and 600.
The events leading up to the blood bath are germane to the gruesome event and should be mentioned here. These include, the draconian measures enacted with the passing of the Rowlatt Act which provided for detention without trial for indefinite periods among other things and had caused vehement protests in the Punjab more than other parts of the country. The situation in Amritsar was on the boil, Gandhi who was on his way to the Punjab was expelled from the province and sent back to Bombay on 9 April, two of Amritsar`s popular leaders, Dr Kitchlew and Dr Satypal were made to leave the city as well and taken to Dharamsala. Violence and arson followed leading to several casualties among Englishmen.
In the midest of all this, on 11 April, Brigadier General Reginald Dyer, Commanding Officer of the 45th Brigade, arrived in Amritsar. Dyer was not ordered to move to the city but came on his own accord.  Dyer`s force at Jalianwala Bagh (he had come to know of the meeting planned earlier in the day on 13 April) consisted of, according to Wagner, twenty-five men of the 9th Gorkha Rifles, twenty-five men of the 54th Sikhs and 59th Scinde Rifles (Frontier Force). Apart from the Gorkhas, the detachment consisted of mostly Baluchis and Pathans as well as probably some Sikh sepoys. Wagner describes the scene after the order to fire was given thus, “panic rippled through the crowd as people realised what was happening and there was a surge towards the exits on the eastern and western sides of the Bagh, or simply away from the firing line, towards the southern wall.”
The book also portrays the infamous crawling order inforced by Dyer and his colleagues in a lane where an Englishwoman, Miss Sherwood, had been attacked by Indian miscreants as well as the brutal public floggings of people, many of whom were innocent. The Hunter Committee formed to inquire into the tragedy indicted Dyer, but let him off lightly, merely dismissing him from service. Winston Churchill, then Secretary for War, came down heavily on Dyer in the British Parliament, defining Dyer`s actions as “Prussian tactics of terror”. He went on to say, “We cannot admit this doctrine in any form. Frightfulness is not a remedy known to British pharmacopoeia.”
All said and done, Dyer was well looked after his discharge from the army. A fund of 26000 pounds was raised by the Morning Post newspaper so that he could spend his retired life in comfort. The author is of the opinion that a forthright apology from the British administration would sustain a sentimental vision of the British empire in the centenary year of the tragedy and not represent a condemnation of the colonial system which, in Gandhi`s words, Jallianwala Bagh represented.
Wagner has written an exhaustive and objective work on his subject and this book will be an important addition to the library of India`s freedom movement.