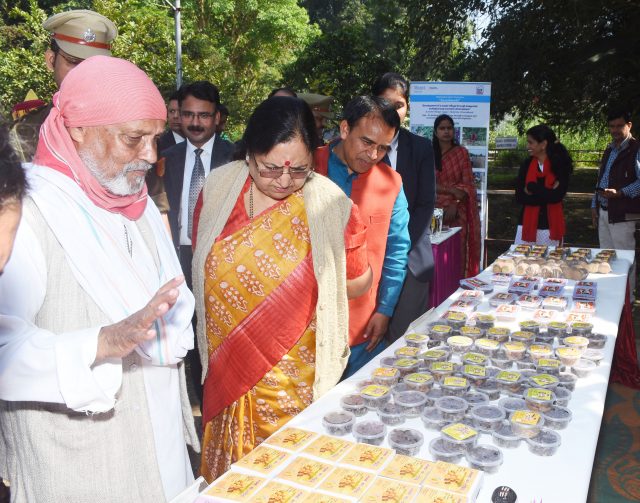 Dehradun, 5 Nov: Governor Baby Rani Maurya said today that students must be given training in social work and rural developmental works from the first year of graduation by universities in the State. Universities, colleges and social organisations should work together to connect the students with such issues. This would mitigate the problem of migration effectively in the State. The Governor also suggested organising a seminar on the “Movement against drug abuse” by all the universities and colleges.
Governor Baby Rani Maurya said this at the launch of a social service credit programme collectively organised by HESCO and Universities of the State at Shuklapur village, here, on Tuesday. Maurya said that the youths should be connected with their roots and culture. They needed to be introduced to traditional techniques and rural life.
Higher Education Minister of State Dr Dhan Singh Rawat announced that 15 days training in a social service credit programme would be conducted in all universities of the state. Every university and college had adopted a village. Universities needed to be connected with social organisations.
During the programme, the representative of Kumaon University said that an MBA in rural management was being conducted at the varsity. Kumaon University was the first in the country to do so. As many as 27 students of MBA in Rural Management had adopted a village, each. The representative of Uttaranchal University said that 5 villages had been adopted where water conservation was being ensured. Dev Sanskriti University has also started a course in life management.
Representatives of Kumaon University, Uttaranchal Open University, Subharti College, Dev Sanskriti University and Graphic Era University were present on the occasion.