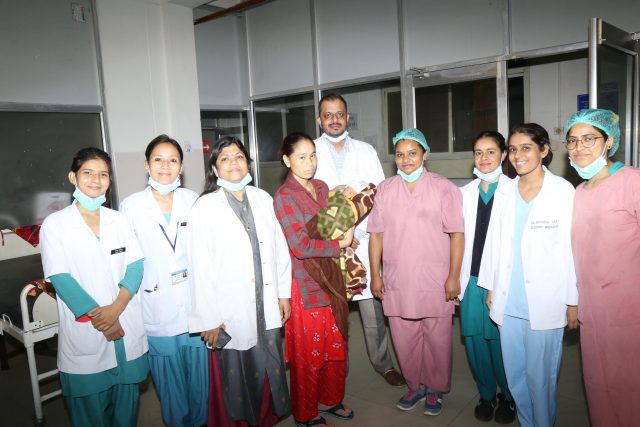 By Our Staff Reporter
Dehradun, 15 Nov: Pediatric Surgeon of Shri Mahant Indiresh Hospital, Dr Madhukar Maletha and his team have successfully carried out a rare surgery on a premature baby weighing just 1100 grams. The case is rare because the baby was born in the eight month of pregnancy. The weight of the baby was far less compared to a healthy new born.
After the successful operation, the ultra modern ICU care of the Hospital saved the life of this low weight premature baby. The baby did not have a food pipe and, thus, was given feed via IV fluids. After the surgical team constructed a food pipe through the operation, the baby is now able to breastfeed and drink milk from a bottle.
Chairman of the Hospital, Mahant Devendra Dass has congratulated Pediatric Surgeon Dr Madhukar Maletha and his team for the successful operation.
A resident of Khatima gave birth to a baby boy. In the initial tests of the baby, it was revealed that the food pipe was not existent. The parents got the baby admitted at the Mahant Indresh Hospital. After tests, it was revealed that the baby was suffering from Esophageal Atresia with Double Fistula. Only one child in 4,500 children suffers from this problem. The food pipe of the baby was joined with the breathing tract. Dr Madhukar Maletha and his team successfully constructed the baby’s food pipe and, secondly, the obstacle was removed from the breathing tract. Significant roles were also played by Senior Pediatrician Dr Ragini Singh, Dr Nitesh, Dr Bharti , Anaesthesia Department’s Dr Kyizom, Operation Theatre Staff Ratna, Kalsang and Pradeep in making the operation a success.