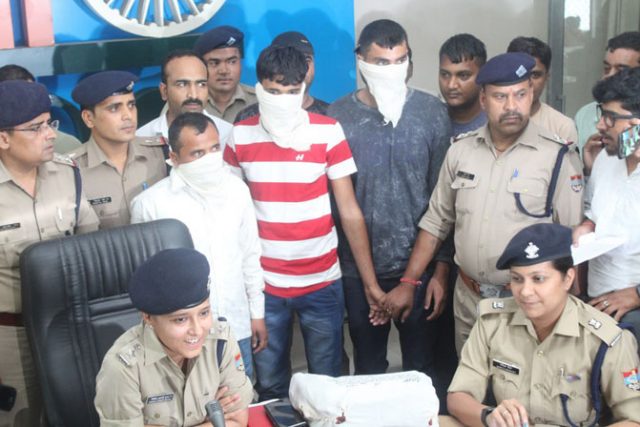 Dehradun, 27 Jul: Dehradun police claim to have solved the recent petrol pump loot case. Three hardcore criminals of UP have been arrested, and Rs 1.75 lakhs of the amount that was looted, as well as two country made pistols, were also recovered from them.
It may be recalled that late night on 24 June, the owner of a petrol pump, Gagan Bhatia was held up by four criminals riding two motorcycles. They took away a bag containing the day’s earnings at the pump after shooting Bhatia. The police had begun immediate investigations under the leadership of the SP-City and CO-City.
After studying CCTV footage in the area and after input from informants, it was discovered that the miscreants had put at a flat in Premnagar. They had gone missing from the day of the crime. It was learned that they were planning to come and pick up their belongings from the flat. When they did, they were nabbed by the police and identified as Kamendra, resident of village Raipur Berisal; Vipin Kumar, resident of Nathaur, Bijnor; and Rohan Rathi, also of Bijnor. The money and the pistols were recovered from them. They revealed that the rest of the money was with their cohort, Ajay, resident of Village Raipur Berisal.
It has been found that they are hardcore criminals out on bail. They had zeroed in on Gagan Bhatia after a recce to identify possible targets. After the incident they had hidden in a nearby tea estate. They had escaped later on their two motorcycles via Doiwala to Haridwar. They returned to pick up their belongings and were nabbed.

Garhwal Post has established itself as a credible, balanced and forward looking newspaper in India. Based in Uttarakhand, the daily is read by the aware, socially and culturally responsible, high-income elite of society.
Contact us: info@garhwalpost.in
bwwm relationships blogs