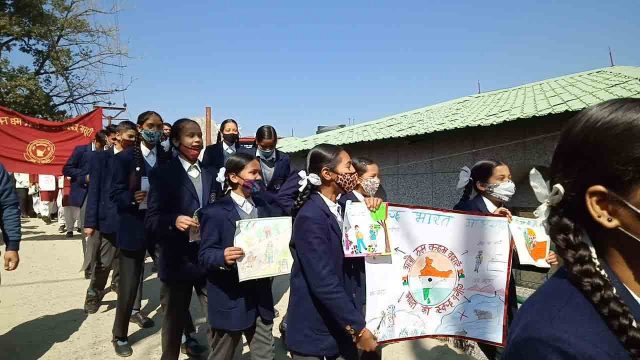 By Sunil Sonker
Mussoorie: 21 Feb: An awareness rally, with the support of students of Sanatan Dharma Girls Inter College, Mussoorie Vidya Mandir School, Mussoorie Girls Inter College, is organised jointly every Sunday by the Mussoorie Municipal Council, Hilldari, Keen and Rotary Club Mussoorie, under the Swachh Bharat Mission. Students and officials also appeal to the people not to use plastic bags. Before the rally, today, a poster competition on cleanliness was organised in schools, in which junior government school and senior government school students participated.
In the junior category competition, Anjali was first, Jatin, second, and Muskan, third. In the senior category, Eliza was first, Khushboo, second, and Nancy, third. The awards were presented to all winners, jointly, by Mussoorie police station In-charge Devendra Aswal and Executive Officer Ashutosh Sati.
Ashutosh Sati said that, under the Swachh Bharat Mission, every Sunday from February to April, cleanliness campaigns and related works are being done on different themes. Work is being done to convey the message of cleanliness to the whole country. He said that with the cooperation of the Municipal Council, Keen, Rotary Club and Hilldari, many works are being done in Mussoorie to make it the most beautiful city in the country.
Arvind Shukla, manager of Hilldari, said that the organisation is constantly working to make Mussoorie the most beautiful and clean city with the help of the Municipal Council. The people are being made aware of solid waste management. Work has been done by the organisation to make benches, tables, and attractive walls, etc., out of garbage, which is also being supported by the people. He said that, every Sunday, efforts would be made for cleanliness under the Swachh Bharat Mission on a different theme.
Present on this occasion were Principal Ratudi, Principal Manoj Rayal, Principal Anita Dabra, Sanitary Inspector Kiran Rana, Virendra Bisht, Ashok Kumar, Jitendra Rawat, Kaushiki Agarwal, Abhilash, Anshul, Deepak, Kiran Jeba, Swati Saloni, Simran, Babita, Leela, Nisha, Priyanka and many others.