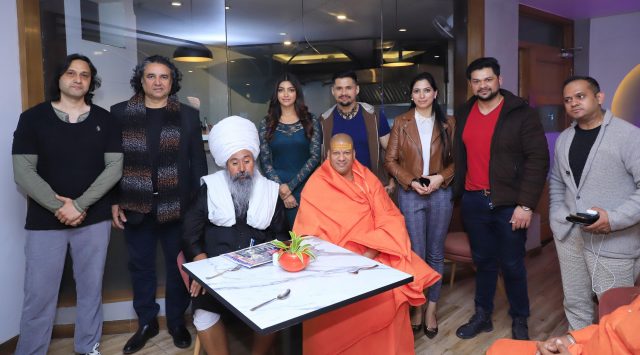 DEHRADUN, 27th Nov: Revered seer Swami Kailashanand Giri from Haridwar last evening paid a surprise visit on the sets of the Sanjay Mishra starrer flim ‘The Fugitive’ being currently being shot in Doon. He was accompanied by Jathedar Baba Kashmir Singh. The film is being produced by Tarun Rawat (JSR Production House), Ziad Sheikh and Vishal Agarwal. During his stay with the film crew, Swami Kailashanand Giri and Jathedar Baba Kashmir Singh showered his blessings on them and wished all success to the film. Tarun Rawat apprised the seers that besides ‘The Fugitive’ the team was also planning to produce more films in near future. He said that they had established a high-tech studio in Doon for postproduction work of movies and that would prove to very convenient for film makers. It may be recalled that very rarely can one see Swami Kailashanand on any film sets. The team was naturally quite excited and thrilled to have him amid themselves and receive his blessings. The film cast includes the iconic Zarina Wahab, Pradeep Singh Rawat, Satish Sharma, Prithvi Zutshi, Parthaa Akerkar, Akanksha Puri, Anjali Nauriyal, Reza Khan, Prashil Rawat amongst others. The Director is Rupesh Paul and the DOPs are Suhas Rao and KG Ratheesh (Kochi).