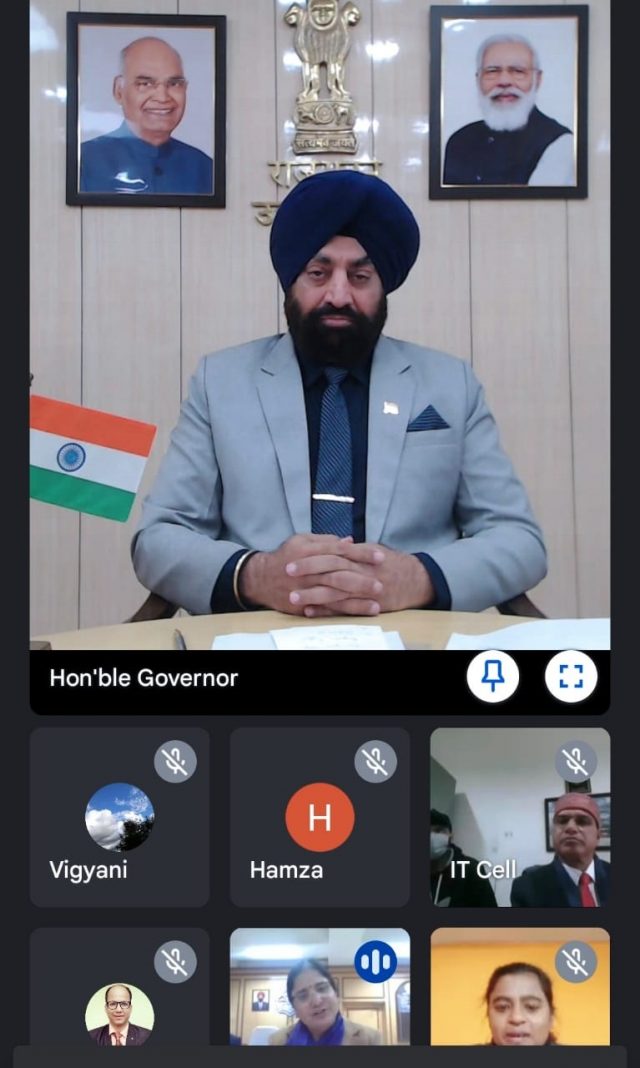 Dehradun, 12 Jan: Governor Lt General Gurmit Singh (Retd) today called upon the youth to spread the message of peace, harmony and brotherhood globally on the occasion of National Youth Day, the birth anniversary of social reformer, thinker and philosopher Swami Vivekanand.
Inaugurating the webinar organised by the Doon University on the occasion, Vice Chancellor Professor Surekha Dangwal said that Swami Vivekanand had laid the foundation for national consciousness in the hearts of the people of India, especially among the youth. Through his thoughts, philosophy and wisdom, he was able to explain, interpret and expand the scientific and spiritual aspects of Indian civilisation while linking India’s regeneration to the age old tradition of spiritualism. As a result, the spiritual message that emanated from India got disseminated across the world. It is this legacy that attracted considerable attention towards India among the world’s nations. Swami Vivekanand’s spiritualism contributed to generating national consciousness in India and created pride in India’s cultural and religious heritage.
Governor and University Chancellor Lt Gen Gurmit Singh said that the country can develop through its youth power, thorough spiritual inclination, knowledge and inner strength. “When I was in the Army, I studied 14 volumes on Swamiji and realised that he had accomplished so much at the relatively young age of 39. Swamiji was very young when he could inspire a whole generation of Indians and instill in them a deep sense of self-respect, nationalism and love for the mother land.”
He recalled Vivekanand’s words spoken at the Chicago ‘Dharm Sansad’ decades ago, which proved to be crucial in introducing the Indian knowledge system, culture and values to the world. Those words continue to remain relevant and will continue to guide generations in the future. He emphasised that Indian youth are recognised the world over for their hard work, integrity and commitment.
“India is a young country and marching on its way towards becoming a Viswhaguru. All of us have to contribute in this march while upholding theage-old values of Indian traditions, of spiritualism, harmony, peace and brotherhood,” he added.
Appreciating the various initiatives taken by local communities and self help groups in Uttarakhand, the Governor said that he is committed to working for reverse migration to the state with the youth generating employment for themselves and others.
A number of students interacted with the Governor on this occasion. Sankalp, Vigyani, Anshika, Anubhav and other students engaged with the Chancellor, who replied all the queries to their satisfaction.
The programme was moderated by Dean of Students’ Welfare, Professor H C Purohit while Registrar Dr MS Mandrawal proposed the vote of thanks. Uttarakhand Open University Vice Chancellor Prof OPS Negi, Sri Dev Suman Uttarakhand University Vice Chancellor Professor PP Dhyani, Professor Harsh Dobhal, Dr Savita Tiwari Karnataka, Deputy Registrar Narendra Lal, Dr Sudhanshu Joshi, Dr Rajesh Bhatt, Dr Madhu Bisht, Dhriti Dhaundiyal, Saket Uniyal and others were present on the occasion.