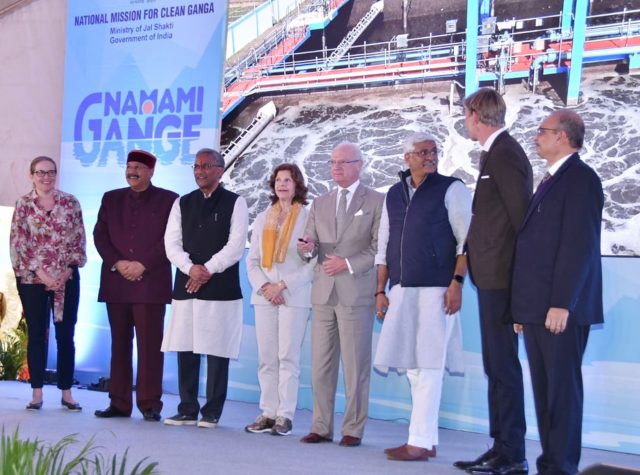 DEHRADUN, 5 Dec: Sweden’s King Carl XVI Gustaf and Queen Silvia, along with Chief Minister TS Rawat, Union Jal Shakti Minister Gajendra Singh Shekhawat and State Tourism Minister Satpal Maharaj, inaugurated a Rs 41.40 crore 14 MLD capacity sewage treatment plant in Haridwar, today, which is based on the hybrid annuity finance model. King Carl Gustaf said on the occasion that there was enormous potential in India and its people. He praised the efforts underway to clean and conserve the Ganga River. He wished all the best to the Namami Gange Project. He expressed the hope that the work being done in India to conserve nature and wildlife would prove successful. Welcoming the King to Uttarakhand, Chief Minister Rawat recalled that Prime Minister Narendra Modi had taken the initiative in 2014 to ensure the purity and unimpeded flow of River Ganga. The Union Government was also working hard to conserve the aquatic creatures and good results were already visible. Much had been achieved in improving the condition of the Ganga. It was necessary, in particular, to protect the rivers from the chemicals that were used in agriculture. The same needed to be done for industrial effluents. He appealed to the common people to protect their immediate environment and shun single use plastic. Jal Shakti Minister Gajendra Singh Shekhawat informed the King that the Ganga provided water to 32 percent of India’s land area and supported the livelihood of 42 percent of its people. Informing the royal guests about the scope of the Namami Gange Project, he said that, in Uttarakhand, alone, 34 projects had been launched for sewage treatment, of which 23 had been completed. Earlier, King Carl XIV Gustaf and Queen Sylvia arrived at the Jolly Grant Airport and were welcomed by protocol minister Dhan Singh Rawat. They then went to Rishikesh, where they visited the Ramjhula Bridge, the Ganga Mata Temple and the Ghat, and also took part in Puja.