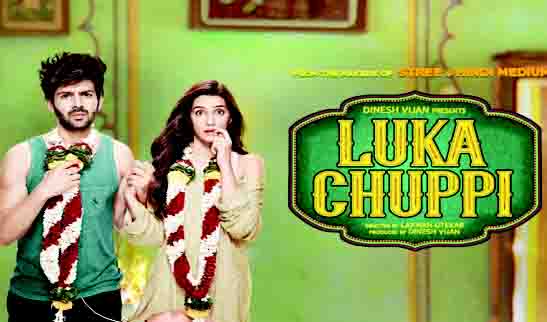 It’s an interesting phase in Bollywood when the script writers and directors are experimenting with biopics, social stigmas and happening practices in society. Luka Chuppi revolves around a live-in relationship in a small town. Keeping Mathura as the backdrop and maintaining the flavour of the town in the behaviour and language of the actors, Luka Chuppi has many hilarious bites and sweet colloquial chews.
A star reporter of a local TV channel, Guddu Shukla (Kartik Aaryan), and an intern Rashmi Trivedi (Kriti Sanon), meet and fall in love. As the boy heads towards wedlock, the girl decides to take a call on marriage by trying live-in first, a practice that is intolerable to a local political bigwig. They are helped by Guddu’s bestfriend, Abaas, during thick and thin. Trying live-in in Mathura and that too under the nose of Rashmi’s father, Vishnu Trivedi (Vinay Pathak), is unthinkable. He is a powerful man with political ambitions and has a brigade as supporting limbs. They discourage live-in relationships and harass unmarried couples found together by chasing and beating the romance out of them. The duo heads to Gwalior for the experiment. They rent a house as a married couple. Unfortunately for their live-in adventure, they end up in a situation where the complete family, comprising his father, mother, an elder brother, his complaining wife and a naughty child, another unmarried elder brother desperately searching for a match for the last eight years and one distant relative with subtle animosity against Guddu, all live under one roof. The live-in trial that had all the activities of a married couple soon becomes a trying phase as the couple strangely feels the urge to disclose their true unmarried status to their family and a fun-ride for the audience begins.
Kartik Aaryan expresses all the confusion that overpowers him as a moderately liberal Mathura resident. He is crushed between his strong feelings for the girl and his fake marital status. It lends him in many a hide-and-seek situation where he is misjudged, targeted, abused and even beaten. He has been in this territory before in previous films.
Kriti Sanon looks beautiful and her character is more bold and experimental than Kartik’s – still there’s nothing extraordinary about it.
Abaas (Aparshakti Khurana) is camouflaged in the Luka Chuppi crowd. The bountiful talent of Pankaj Tripathi remains underused in an ill-considered role. A man who has the ability to make one laugh even with one single line, one little word or with a short pause has been reduced to a madcap.
Atul Srivasatav as Guddu’s father and Alka Amin as his mother are effortless and they do not disappoint in the tailor-made role. All other supporting cast as Guddu’s family are up to the mark.
Vinay Pathak as Trivediji, a hardliner and Rashmi’s father, adheres to his ideology of moral policing with wit and humour.
Cinematographer-turned-director Laxman Utekar in Luka Chuppi maintains the focus on live-in relationships, failing to polish the rough edges that distract. Its many flavours like the protest against a star who has liberal views, the generation gap with conflicting theories, the expressive exasperation in Guddu’s unmarried elder brother, the not-so-viscous evil plans of a distant relative, the innocently devilish, blackmailing child who came to know about Guddu-Rashmi’s secrets, the heavy weight of a lie – all provide many hilarious moments and tacky one-liners. Funny gyaan by a father to his son on evading distractions after marriage, adorable saas-bahu gestures, a nosey neighbour having a mission in life to dig into others’ lives, are some of the endearing moments. The weakness in unconvincing summarisation of what the youth of the biologically youngest nation want and the acceptance shown by the self-proclaimed reformer fluidly can happen only in films.
The music remains loud. The shortcut approach to pick and recreate the 90s hits, Punjabi hits and Mirchi top hits amuse the audience. The resonating effect is felt and the feet-tapping numbers, ‘Tu Luang Mein Elaichi’ and ‘Coca Cola Tu’ will be loved.
Luka Chuppi may be another addition to films on small town ideologies. The earlier films made on the same lines like Toilet, Bareilly ki Barfi, Dum Laga ke Haisha and Stree drastically raised the bar. They were much better films in terms of script, conveying the social message and acting. In Luka Chuppi, the core issue has been handled carelessly, nevertheless some natural emotions have been captured brilliantly. While working on a project on live-in relationships for the channel, Rashmi interviews an old village woman. To the surprise of all, she approves the concept, while a sadhu stresses upon love as the essential ingredient in any relationship pointing towards the immortal bond of Radha- Krishna: these are some of the savoury comments coming from the crowd in Luka Chuppi.
Luka Chuppi has many joyous moments but the sordid treatment given to the finest of actors and loose script goes against it. The plot does tickle the ribs, especially in the second half. The dare-devil remarks by Rashmi and poor Guddu’s tension in the live-in bond does indicate something strong and highlights the fact that times are changing. Luka Chuppi without hiding anything reflects the liberal mood and practices of society. It can be watched to receive sporadic doses of laughter.
I go with two and a half stars.

Garhwal Post has established itself as a credible, balanced and forward looking newspaper in India. Based in Uttarakhand, the daily is read by the aware, socially and culturally responsible, high-income elite of society.
Contact us: info@garhwalpost.in
casual hookups sites tagged dating app