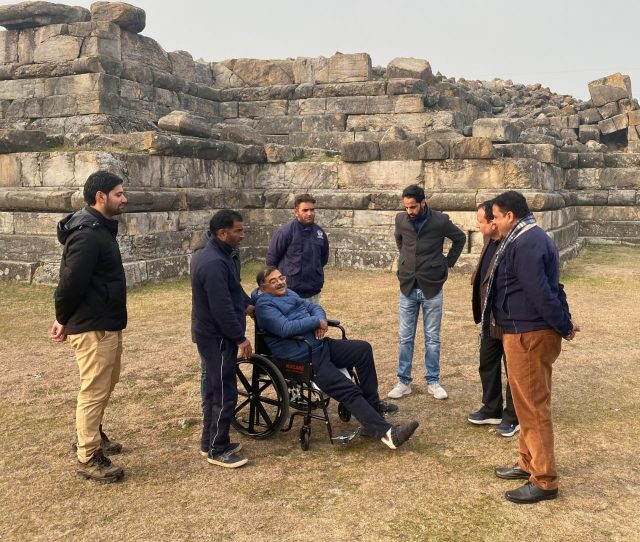 New Delhi, 25 Nov: Responding to the call of duty, and inspired by PM Modi’s vision to save heritage while correcting historical wrongs done by prejudiced historians, the Chairman of the National Monuments Authority, Tarun Vijay, is visiting significant monuments of Kashmir to commemorate World Heritage Week . He will prepare a report on the resurrection of some of the major and destroyed Hindu temples and Buddhist monuments, and create awareness to preserve heritage.
Despite being injured in an accident and on a wheelchair, Tarun Vijay responded to the call of duty and insisted on completing his pre-scheduled tour. Senior ASI state officers Mr Hashmi and Mustafa Ahmad, Director, State ASI, hugely appreciated his dedication. They are accompanying him on his site tours.
Tarun Vijay said it was sad that inspite of having several grand world heritage sites like Martand, Parihas Pora and Harwan, Kashmir hasn’t bothered to work on any one of them to be declared a UNESCO World Heritage site. In fact Parihaspora, the ancient capital of Emperor Lalitaditya, alone, is a gem among all world heritage sites existing in India. It has the world’s largest Stone Stupa, found nowhere else either in India or abroad.
Vijay said that top on his list is the renovation and resurrection of the Vittal Bhairav Temple in Rainawari, downtown Srinagar, which is more than a thousand years’ old and was destroyed by terrorists. Even, today, on the gates of this historic temple anti-national slogans – Go Back India are written.
There are 56 important monuments that are declared as national monuments of importance and 57 monuments are state protected. Many of the monuments are in a dilapidated condition on the verge of destruction. Of the 56 national monuments, 43 are in Kashmir and 15 in Jammu region. Several monuments of great importance are yet to be included in the list of national monuments. Monuments that define the real soul and spirit of Jammu and Kashmir like Martand Temple, Pandrethan Temple, Zorawar Fort, Reasi Harwan (where the great monk Kumarajiva’s journey to teach China tenets of higher Buddhism began) need special attention and a strong people’s movement to preserve them.
Tarun Vijay will also explore possibilities to have the grand Martand Temple restored to its pristine glory. He said that it is due to Prime Minister Narendra Modi’s great interest in preserving heritage and Lt Governor Manoj Sinha’s initiatives, many projects are being undertaken to preserve hitherto ignored heritage sites.
Governor Manoj Sinha has ordered Zorawar Fort Reasi’s preservation and, for the first time in history, the Gurudwara of Baba Banda Singh Bahadur Reasi has a Banda Singh Ghat on the Chenab. A state of the art museum on the invincible warrior is also being envisaged.

Garhwal Post has established itself as a credible, balanced and forward looking newspaper in India. Based in Uttarakhand, the daily is read by the aware, socially and culturally responsible, high-income elite of society.
Contact us: info@garhwalpost.in
farmers only dating site commercial 2022 new dating app hiv+ dating sites