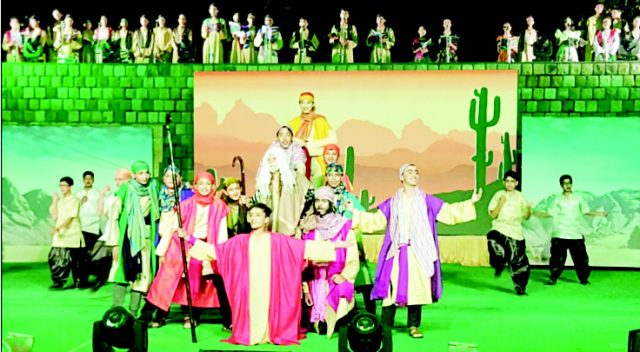 By OUR STAFF REPORTER
DEHRADUN, 15 Dec: Andrew Lloyd Weber’s Broadway classic was brought alive on the Theatron stage at Welham Boys’ School. The musical, Joseph and The Amazing Technicolor Dreamcoat was staged during the Founders’ Day celebrations.
Theatrecian founder, Tathagata Chowdhury, directed this year’s annual show at Welham Boys’ School. Earlier, in the month of September, he directed The Sound of Music at Mussourie Public School, which was hugely appreciated.
BBC4 recognised the Theatrecian as the most prolific and proficient youth Theatre Company in the country in 2007. The company has produced nearly 200 plays in the last 18 years since its inception.
Tathagata is of the opinion that “School plays should not be obnoxiously ostentatious but rather the process should be enriching for a student.” He further adds that the Principal Ms Bindra “is an educationist who believes in the fact that words confined in text books alone, don’t help a student to grow. Exposure to theatre is essential for a child to appreciate life better.”
Tathagata Chowdhury is the founder of Theatrecian. According to the BBC4, this youth theatre company was declared the most proficient and prolific youth Theatre Company in the country (wikipedia). He is a thespian certified by the Royal Shakespeare Company. In 2006 he represented India in a theatre science project in the UK snd later in 2014 in the South Asian Theatre Festival in Ohio, USA. He was the first teacher to teach Theatre Studies, a 100 mark paper, in Eastern India. He conducts various corporate quizzes. At South City International he conducted a Shakespeare quiz for school students last year. He has also won 21 Finishers’ medal in half and full marathons.