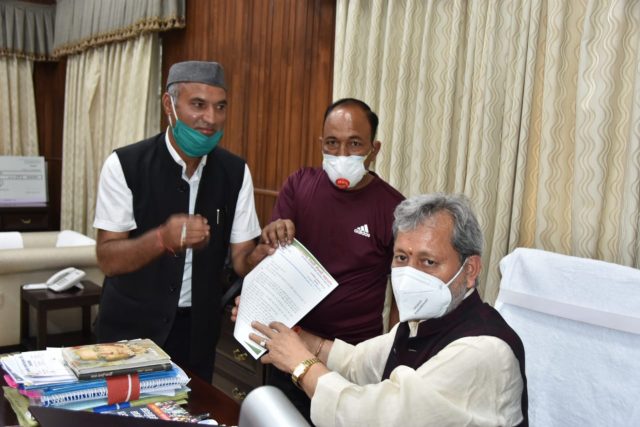 By Sunil Sonker
Mussoorie, 10 Jun: A delegation led by Sundar Singh Panwar, State President of the ‘Uttarakhand Taxi Maxi Mahasangh’, met Chief Minister Tirath Singh Rawat , today, and expressed gratitude for the assistance of Rs 2500 per month to the driver-owners for two months to be provided by the government.
A 10-point charter of demands was also given to the Chief Minister. The demands include 2 years’ road tax exemption, Rs 10,000 financial assistance to driver owners, to end the surrender limit of vehicles under STA rules, free of cost renewal of vehicles, benefit of insurance should be given to Taxi Maxi drivers working on government duty during the corona epidemic, etc.
Kumaon Federation President Thakur Singh Bisht said that the payment made by the government departments for vehicles hired in Pithoragarh had not been done since last year. The Chief Minister directed the District Magistrate to make the payment immediately. Rebate at the Lachhiwala toll tax barrier was also demanded.
Sundar Singh Panwar said that, in the last two years of the Corona period, the inflow of tourists in Uttarakhand had been very little due to which the driver owners had been facing a lot of problems. He expressed confidence that the Chief Minister would soon solve their problems. Dilip Bisht, Deepak Chaudhary, Bir Singh Rana, Mukesh Kharola, Adesh Chaudhary were also present on this occasion.