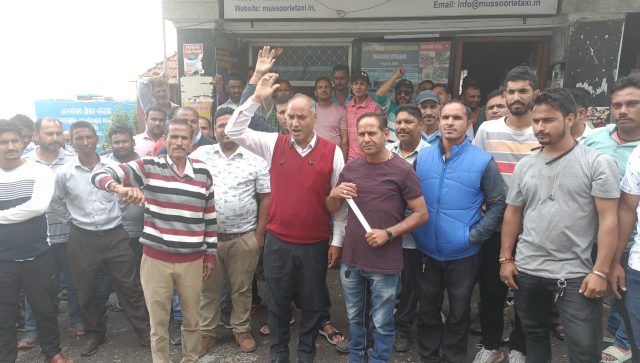 Mussoorie, 18 Jul: The Uttarakhand Taxi Maxi Association has opposed the grant of licence by the Uttarakhand Government to Ola and Uber to operate vehicles in the state.

Under the leadership of Uttarakhand Taxi Maxi Association State President Sundar Singh Panwar, a protest was held against the government by taxi operators, here, today. They accused the government of ignoring the interests of taxi operators. Panwar said that after Ola and Uber get licences to operate vehicles in Uttarakhand, the business of taxi maxi operators across the state would be adversely affected.

He said that taxi operations have been already affected due to the licence already given to operate rental bikes in Mussoorie. He said that in 2019, the Transport Department had issued an order declaring the operations of Ola and Uber illegal. Now, however, the Uttarakhand Government is playing with the livelihood of taxi operators, which would not be tolerated.

On Tuesday, a delegation of the Uttarakhand Taxi Maxi Association will meet Chief Minister Pushkar Singh Dhami and the Transport Minister and demand immediate cancellation of the licence given to Ola and Uber in the state. If the demand is not met, then all taxi operators in the state would open a front against the government.

Garhwal Post has established itself as a credible, balanced and forward looking newspaper in India. Based in Uttarakhand, the daily is read by the aware, socially and culturally responsible, high-income elite of society.
Contact us: info@garhwalpost.in
jos dating site absolutely free adult dating site romantic date night blanket fort