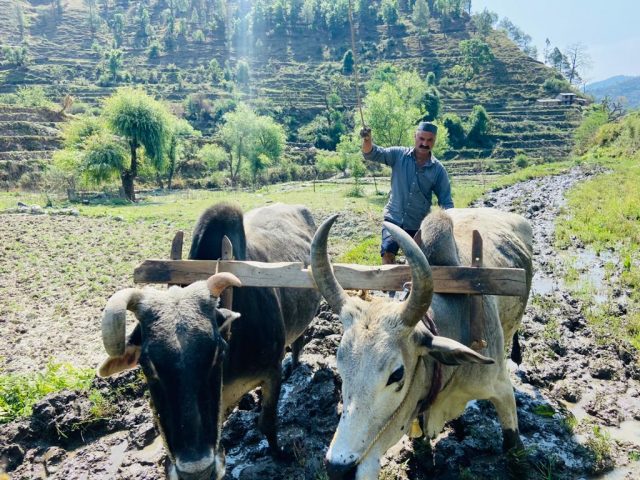 By Our Staff Reporter
Mussoorie, 13 May: Business and employment of all people have become vulnerable during the Corona period and there is threat of economic recession in Uttarakhand. Those associated with the ‘Taxi Maxi Federation’ are forced to work as daily wagers these days.
The State President of the Federation, Sundar Singh Panwar, is presently farming in his village Hatali (Bangaon) located in Uttarkashi district. He says that his travel agency has about 40 vehicles whose wheels are jammed at the present. Some drivers have left because there is no work left. In such a situation, he himself has come to his village and does farming with his family. He said that the crisis of livelihood is hovering in a way that it has become difficult to look after his family. He complained that the government is not helping the taxi maxi and commercial operators in any way, due to which there is a lot of anger. In the past, too, he had demanded two-year exemption on road tax for commercial vehicles and taxis as well as financial assistance of Rs 10,000 to each taxi driver, but this was not done.
The federation also accuses the Transport Department of being hard-hearted. Panwar added that the Transport Department is preparing to provide tax exemption and financial assistance to the owners of state carriage vehicles, while no exemption is being given to the owners of contract carriage permits. The operators say that the months of May and June comprise the tourist season but it has been hit by the pandemic. He recalled that, in the last lockdown, many taxi owners sold their vehicles at very low prices. This year, many taxi maxi owners and drivers are reduced to earning Rs 450 as daily wagers.