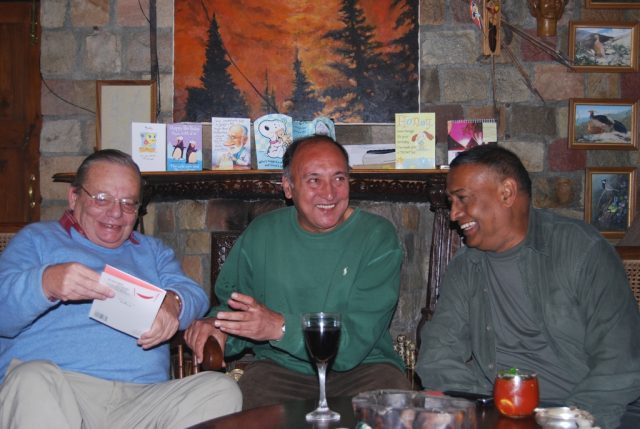 Have you heard about Victor Banerjee Uncle?’ asks young Rakesh Bond on the line: ‘Ruskin Dada’s asked me to call you!’ My heart stops. Suddenly I am numb. ‘What news?’ I gasp. ‘Not good,’ says he. ‘We heard he passed away in Assam!’ Putting on a brave face, I gather myself and step out of Ram Chander’s shop in Landour bazaar. My head in a tail spin, one thought stumbles over the other trying to get out. What on earth am I going to do? Or tell Maya? Or tell his daughters? Of course social media buzzes with its ‘likes’ and ‘RIPs.’ Which way do I turn? Shall I check with old friends in Calcutta. A call later, truth slowly begins to worms its way through. ‘Ganeshji WhatsApp ka kamaal hai!’ a harried Gobindo Roy, a Tollywood film producer tells me. ‘Fake news!’ A surprised Bursar of the Moran school says. ‘He’s arriving here any minute from Dibrugarh!’ Meanwhile my mind games continue: I find myself back to our first brief meeting 1983 – in the most unlikely of places –the one- way traffic barrier at Govindghat in Chamoli-Garhwal. Victor and Maya were coming down the mountain, while Ruskin Bond and I were going to Badrinath, hoping to do our first coffee table book for the Garhwal Mandal Vikas Nigam. Or was it on a casual walk with the Bond that saw the two of us straying into a film set at Mount Herman beyond Sister Bazaar. Victor was acting in Lekh Tandon’s biopic Dusri Dulhan, but was we did not meet him that day. He was busy working. ‘Oh my God! Ruskin Bond,’ exclaimed actress Shabana Azmi. ‘I thought you were dead like all the other authors in my school textbook. And please do forgive my attire, I don’t normally dress like a tart!’ Afterwards the Banerjee family settled down in the Parsonage, their picture postcard cottage facing the Kharhakund massif of the eternal snows, having put their girls, Keya and Dia into school and the years peeled away in fast forward. Try as hard as I may, I fail to draw a bead on exactly when we turned friends. Victor told us: ‘Hearing that Satyajit Ray was scouting for Shatranj Key Khiladi and not knowing a word of Urdu, but on an impulse I walked into his office and stepped out only after I had been chosen. ‘Later as luck would have it, David Lean rang up Ray asking him for an Indian actor to play the role of Aziz in A Passage to India. As luck would have it, Lean took me under his wing. ‘What a grandmaster! Working with him meant you were spoilt forever. He had spent five years on a script based on Foster’s book before his trustees gave him the go ahead. Every nuance had been woven in. There were no shortcuts.’ One day, Victor said to me: ‘Come along with us Ganesh! Take some stills!’ Generously he invited me to come aboard in the making of Where No Journeys End – a film for the Indian Railways. Going through a rough patch, I needed little convincing. That one break gave me my first coffee table book A Passage Through India. All these and more memories clutter the mind. Luckily I spot a post by Keya, his younger daughter: ‘My father is hale and hearty. He is arriving at the school any minute.’ Meanwhile in far away at the Moran School for the Visually Handicapped in Assam, Victor, hemmed in by eager TV news crews says: ‘I got more hits after my death! But it’s a bad joke this news going viral of my being dead!’ While all around him, everyone sobs but with tears of relief. It seems the mischief originated in Tripura where a Facebook account was hacked to upload this fake new. Predictably, a few minutes later, the tsunami hit our hills. Is this the harsh reality of our cyber world? We live with artificial friends on Facebook, Twitter and WhatsApp and when someone dies, we post ‘likes’. Where have all the old fashioned values gone? What have we done to relationships? Have we already lost the plot?